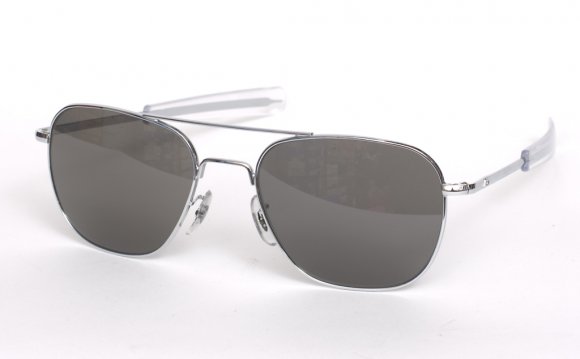 Prior to flying on Apollo 7, astronaut Walter Cunningham worked with an Australian opthalmologist to develop lightweight and durable sunglasses for the Apollo astronauts.

The project got as far as the prototype stage, with a unique pair of aluminum-framed sunglasses produced as shown on the right.

In the end, however, the lengthy process required to get the design flight-qualified by NASA proved too much and an existing design already used by the Gemini astronauts was chosen instead.

The sunglasses selected by NASA for use by the astronauts were American Optical Co. Original Pilot Sunglasses®, a model with a long history of use in the U.S. military.

The sunglasses & pouch carried by Mike Collins on Apollo 11

The Apollo stowage lists show that each astronaut carried a pair of sunglasses in a reinforced beta cloth pouch in a pocket of their in-flight garment, with the sunglasses of the Commander and Lunar Module Pilot traveling with them to the lunar surface and back.

In addition, the stowage lists show three more pairs of sunglasses stowed in the survival kit that remained onboard the Command Module throughout the flight. In reality these were sun goggles, as can be seen in these images of the Apollo 11 survival kit at the NASM. The Smithsonian collection also contains a pair of sunglasses from Jim Mcdivitt's Gemini 4 survival kit. These appear to be a slightly modified pair of American Optical sunglasses (not the Original Pilot model) with some gauze added around the sides and nose area as protection against the sun, as can be seen here.

Reading the Apollo technical debriefings it seems that many crews chose not to actually wear their sunglasses as they were found unnecessary. Some complained that if they wore them to make observations through the windows they needed to take them off again as soon as they tried to look at anything inside the spacecraft e.g. to make notations, making it easier just to leave them off all the time. By contrast, it's worth noting that the Apollo 16 crew described their sunglasses as mandatory.

The 02 serial number of the 1995-sold sunglasses marks them as one of the earliest Apollo-issue pairs. As the tail-end of the Gemini program did overlap with the beginning of the Apollo program perhaps it is possible that these sunglasses with Apollo-style part numbers were carried by Aldrin on Gemini 12. The beta cloth pouch that accompanied them, on the other hand, was definitely not flown on Gemini 12. Given the -203 part number and 1040 serial number I would strongly suspect that this was the sunglasses pouch carried by Aldrin on the Apollo 11 mission. That brings us to the sunglasses sold in 1996. Here again, the 43 serial number would strongly suggest that they were issued to Aldrin in 1969 so I believe these are probably the pair he carried on Apollo 11. I have entered these items in the Annex below assigned to the flights I suggest here rather than those of the original auction listings.