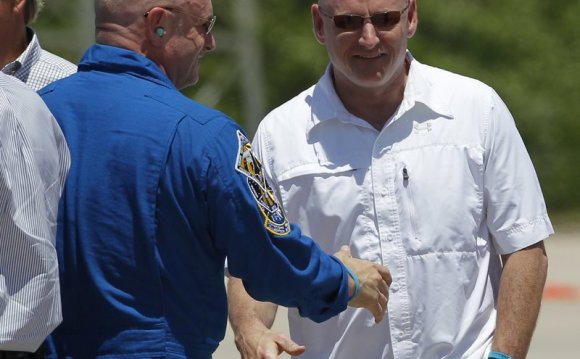 Astronaut Scott Kelly's identical twin pulled a fast one on NASA right before his brother blasted off on a one-year space station mission. NASA Administrator Charles Bolden told Kelly on Monday that he almost had a heart attack when his brother Mark showed up on launch morning last week without his usual mustache. "He fooled all of us, " Bolden said. Mark Kelly's mustache was "the only way I can tell you two apart."

Scott Kelly arrived at the International Space Station on Friday night following a launch from Kazakhstan. He will remain on board until next March, as will Russian cosmonaut Mikhail Kornienko. It will be NASA's longest spaceflight ever. "It's like coming to my old home, " said Scott Kelly, who spent five months at the space station in 2010-2011.

The White House, meanwhile, sent congratulations Monday. President Barack Obama's science adviser, John Holdren, wished Kelly, Kornienko and the rest of the crew the best of luck and noted that the yearlong mission is an important milestone on the path to sending humans to Mars in the mid-2030s. "You guys are all heroes up there, and we're depending on you, " Holdren said in a phone hookup.

Mark Kelly, meanwhile, paid tribute to the brothers' father, who stayed behind in Houston for last week's launch. Richard Kelly, a retired and widowed police officer, is the only parent to endure a child's rocket launch so many times — eight between the two. "He's been a trouper, " Mark said.