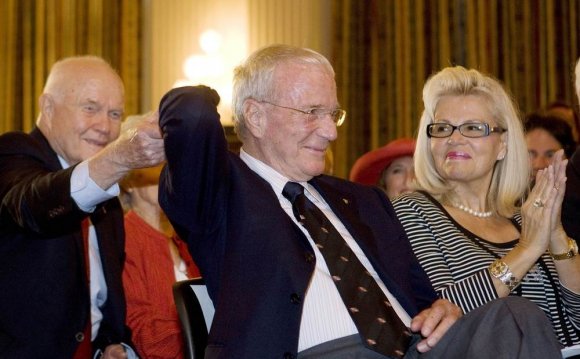 This past May, I went to Spacefest V in Tucson, Arizona, one of the few events where you’d do well to pay special attention to the elderly men you meet in the hall because they just might have walked on the Moon. The group of kids I saw barreling down the breezeway one afternoon in their haste to get to the pool certainly wasn't aware that a group of historic men were in the building. And neither were their parents. The whole group was just careful to get past the elderly man on the motorized scooter without knocking into him. None of them gave him a second glance. That man was Scott Carpenter, the second American to orbit the Earth.

Scott Carpenter was one of NASA’s first astronauts, one of the so-called Mercury Seven. But he’s not the most recognizable name of the group. John Glenn, of course, was the first American to orbit the Earth, and is now the only surviving astronaut of his class. Al Shepard was America’s first astronaut and the only Mercury astronaut to walk on the Moon. Wally Schirra was the only astronaut to fly all three Apollo-era programs – Mercury, Gemini, and Apollo. Gus Grissom led a fascinating career until his untimely death in the Apollo 1 fire. Deke Slayton, grounded in 1962 with a heart condition, led the astronaut office before flying on the 1975 Apollo-Soyuz Test Project mission. And Gordon Cooper set two long-duration flight records on his Mercury and Gemini flights.

Carpenter only flew one mission, a relatively short three orbit Mercury flight on May 24, 1962. And the legacy that has persisted is one of an astronaut disobeying commands, putting the mission – and his own life – in jeopardy. But this is far from a fair assessment. There’s a lot more to the story.

Carpenter’s flight assignment came as a bit of a surprise to his peers. Deke Slayton was scheduled to fly after John Glenn but was pulled from the flight rotation with atrial fibrillation. But rather than give the flight to Slayton’s backup pilot Wally Schirra, NASA gave it to Glenn’s backup Carpenter. The logic was that Carpenter, who had been training closely with Glenn for months, was the best prepared astronaut the agency had. And in light of the mission’s complexity, this was probably a good decision.

Glenn had proved that an astronaut could be more than just a passenger in space, so with its second orbital mission NASA decided to really push the astronaut into a central role. Building on the experience gained from Glenn’s flight and seeking to gather as much scientific data as possible, Carpenter’s flight plan quickly filled up.

His mission was packed with science goals, experiments, and a continual transfer of biomedical data sent to mission control. Carpenter would also have more control over his spacecraft. By combining the yaw-roll maneuvers, NASA wanted the astronaut to orient his spacecraft to see sunrises, day and night horizons, Earthly landmarks, and find certain stars as navigation references. The agency also wanted him to flip his spacecraft upside-down placing his head towards the Earth for a disorientation experiment. Other science experiments included releasing a multi-colored balloon tethered to the capsule as a test of depth perception in space, observing the behavior of liquid in microgravity, using a specialized light meter to measure the visibility of flares on Earth, taking weather photographs through a variety of different filters, and studying the airglow layer.

As launch day neared, Carpenter named his spacecraft Aurora 7. "I think of Project Mercury and the open manner in which we are conducting it for the benefit of all as a light in the sky. Aurora also means dawn — in this case the dawn of a new age." He also happen to have grown up on the corner of Aurora and Seventh Avenues in Boulder, Colorado.

After a 1:15 AM wakeup call, a specially prepared breakfast of filet mignon, poached eggs, strained orange juice, toast, and coffee, and a physical examination, Carpenter was covered in biomedical sensors and snugly cased inside his silver flight suit. A series of holds due to fog stalled an otherwise flawless prelaunch countdown until finally, at 7:45 AM, the Atlas bearing Aurora 7 roared to life and carried Carpenter off the Earth.

Carpenter’s first order of business once in orbit was to turn the spacecraft around to its normal backward flying attitude, one that promised an easy retrofire burn and return to Earth. And he was tasked to do this manually; Glenn had let his onboard computer make this manoeuver and it had cost him a significant amount of fuel. And in spaceflight, fuel is among the most precious commodities.

US astronaut Scott Carpenter dies at 88