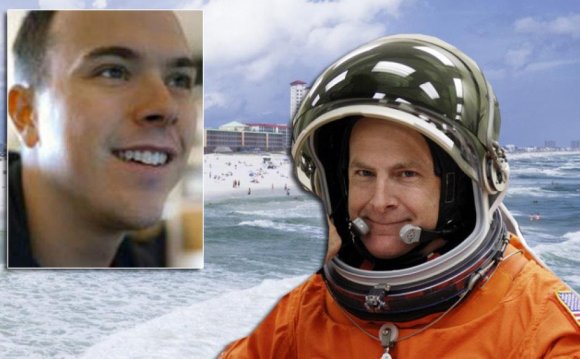 Former NASA astronaut Edgar Mitchell died February 4, 2016, on the eve of the 45th anniversary of his Apollo 14 lunar landing. He was 85. Mitchell was one of 12 Apollo astronauts to walk on the moon - the only humans to ever set foot on another world.

The American men who went to the moon

The Apollo 11 lunar module Eagle prepares to land men on the moon for the first time. During each of the six Apollo missions that landed on the moon, two astronauts walked on the lunar surface.

Apollo 8 was the first manned spacecraft to reach the moon. The mission was designed to test the spacecraft and crew, but it did not include a lunar landing. From left are crew members James Lovell, William Anders and Frank Borman.

Apollo 8 launched on December 21, 1968, and entered lunar orbit on Christmas Eve. That night, the crew held a live broadcast and showed pictures of the Earth from their spacecraft. "The vast loneliness is awe-inspiring and it makes you realize just what you have back there on Earth, " Lovell said. They ended the broadcast taking turns reading from the Book of Genesis.

The Apollo 10 mission was just like a lunar landing missing - but without the landing. Crew members, from left, are Gene Cernan, John Young and Thomas Stafford. They launched on May 18, 1969, made 31 orbits of the moon and splashed down in the Pacific on May 26.

Apollo 11 was the first manned mission to land on the moon. The crew members, from left, were Neil Armstrong, Michael Collins and Edwin "Buzz" Aldrin. The mission launched on July 16, 1969.

On July 20, 1969, Armstrong became the first human to set foot on another world. NASA says more than half a billion people watched on television as Armstrong climbed down the ladder to the moon and proclaimed: "That's one small step for a man, one giant leap for mankind."

Armstrong took most of the photographs during his historic moonwalk, so you don't see many pictures of him - this was before the age of the selfie. This rare shot from Aldrin shows Armstrong near the lunar module Eagle.

Aldrin was lunar module pilot and the second man to walk on the moon. On each lunar landing mission, one crew member stayed in orbit in the command module. On this mission that was Collins.

The crew of Apollo 12, from left, were Charles Conrad, Richard Gordon and Alan Bean. Conrad and Bean walked on the moon. Gordon stayed on the command module. The mission launched November 14, 1969, landed on the moon November 19 and returned to Earth on November 24.

Bean carries equipment on the moon during the Apollo 12 mission.

Conrad examines the Surveyor 3, a spacecraft that landed on the moon in 1967. The Apollo 12 crew touched down about 600 feet from the older spacecraft. They collected its television camera and several other pieces and brought them back to Earth.

The crew members of Apollo 13 - from left, Fred Haise, James Lovell and John Swigert - are seen after splashdown in April 1970. Apollo 13 was scheduled to be the third lunar landing mission. The crew launched on April 11, 1970, but two days later and about 205, 000 miles from Earth, the service module oxygen tank ruptured, crippling the spacecraft. "Houston, we've had a problem, " Lovell said. Instead of landing, the crew did a flyby and came home, safely splashing down on April 17. Lovell's book "Lost Moon" became the basis for the motion picture "Apollo 13."

The crew of Apollo 14: from left, Stuart Roosa, Alan Shepard and Edgar Mitchell. The mission launched January 31, 1971, landed on the moon February 5 and returned to Earth on February 9. Shepard and Mitchell conducted moonwalks while Roosa orbited in the command module.

Shepard stands beside a portable workbench set up on the moon.

Mitchell stands by the U.S. flag during his mission's first spacewalk.

Apollo 15 was the first mission capable of a longer stay on the moon, and the crew had its own rover. From left are Jim Irwin, David Scott and Alfred Worden. Irwin and Scott walked on the moon while Worden kept watch in the command module. The mission launched July 26, 1971, landed on the moon July 30 and returned to Earth on August 7.

Scott salutes the U.S. flag during an Apollo 15 moonwalk.

Irwin works near the lunar rover.

The Apollo 16 crew, from left: Thomas Mattingly, John Young and Charles Duke. Young and Duke walked on the moon while Mattingly stayed in the command module. The mission launched on April 16, 1972, landed on the moon April 20 and returned to Earth on April 27.

Young leaps from the surface of the moon as he salutes the U.S. flag.

Apollo 17 was NASA's last manned mission to the moon. It launched on December 7, 1972, landed on the moon December 11 and splashed down on Earth on December 19. From left are Harrison Schmitt, Gene Cernan and Ronald Evans. Schmitt and Cernan walked on the moon while Evans orbited in the command module. The crew stayed on the surface 75 hours and collected 243 pounds of lunar material.

Schmitt stands next to a huge lunar boulder during an Apollo 17 moonwalk. The lunar rover is in the background. Schmitt was the 12th man to set foot on the moon, but Cernan was the last to leave.

Cernan holds a corner of the American flag during the first Apollo 17 moonwalk. Cernan, the last man on the moon, had these parting words as he left: "We leave as we came and, God willing, as we shall return - with peace, and hope for all mankind."