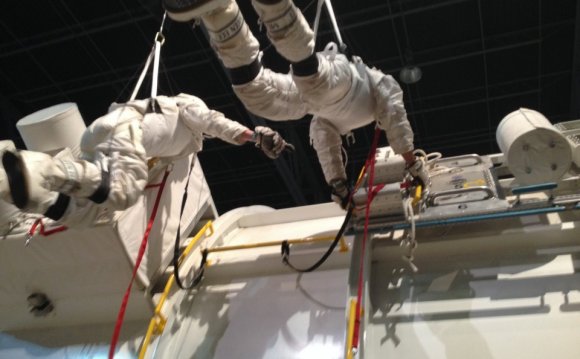 Experts discuss what it takes to become an astronaut, and what the experience is like.

The following questions were answered by astronomer Dr. Cathy Imhoff of the Space Telescope Science Institute.

What are the requirements to become an astronaut?

All astronauts have some special skills, either as pilots or scientists. So they have all gone through college and gotten some experience in their particular field. I don't know of any age requirement, but the experience that is needed would probably mean that the astronauts are at least 25, more likely over 30.

When astronauts go up into outer space, what do they wear under their spacesuits?

I understand that it's pretty cold in space, so I bet they wear long underwear! I asked your question about what an astronaut wears to my friend, Ron. He said: Under the orange launch and entry suits we wear a pair of long johns. Since you are likely to be in the suit for several hours and since you can't open it up in any way to "go, " we also wear a diaper for adults! As soon as we reach orbit we remove the suits and put on regular clothes for the duration of the mission (no diapers!). The suits are put back on just before deorbit. The EVA suits are the same with an added cooling garment that goes on over the long johns. It is like another pair of long johns with small plastic tubing woven all through it. Chilled water is circulated through it to get rid of body heat and solar heat.

How near can an astronaut in a spaceship get to the sun before he or she gets burned?

It depends on how well the spaceship is designed to handle the heat and light. Even an astronaut in space around Earth could get burned if he or she didn't have a good spacesuit on — one side would get fried by the sun, and the other would freeze in the dark! Now you know why the astronauts have to wear such bulky spacesuits!

How does the pressure in space affect you?

Well, there isn't any pressure, because space is nearly a vacuum. That is one of the reasons that astronauts wear spacesuits.

How can astronauts breathe in the space shuttle?

In order to breathe on the shuttle, they take along a supply of oxygen. There are also filters that take carbon dioxide out of the air. Did you see the movie Apollo 13? One of the biggest dangers for them was that their oxygen tank exploded, and their carbon dioxide filters were clogging up!

How and what do astronauts eat in space?

My friend Ron was an astronaut who rode on two shuttle missions. He told me that they eat whatever doesn't have to be refrigerated. So at first they eat up the fresh fruit and vegetables, so they don't spoil. Then they eat the packaged meals that you heat up. They have to use a sort of toaster oven though, they can't use a microwave on the shuttle. I think by the end of their trip the food gets pretty boring!

What happens if the astronauts lose one of their tools?

Astronauts try not to lose anything, including tools, because they float off into orbit. Later you might be going along in orbit and that tool could smash into the shuttle! Fortunately something like that would not stay in orbit forever. The shuttle is only a few hundred miles up. There is a very small amount of atmosphere up there, just enough to gradually slow "space junk" down so that it eventually falls into the atmosphere and burns up.

Pope questions astronauts about looking down on Earth