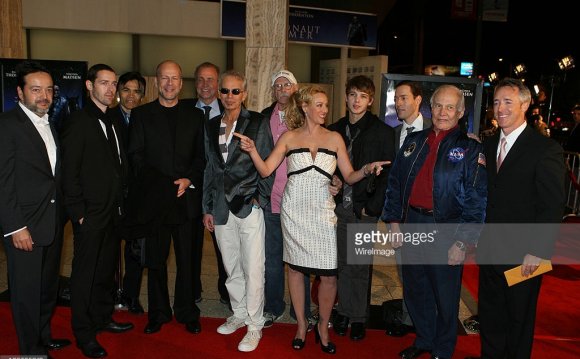 The Astronaut Farmer is considerably more than the story of a guy who builds a rocket. In truth, writer/director Michael Polish and co-screenwriter Mark Polish have concocted a tale about devotion; one in which a man pursues his far-fetched dream at any cost, categorically refusing to let anyone interfere with his plans. As an unconventional movie built on a conventional premise, The Astronaut Farmer works just fine.

The Polish brothers, whose Twin Falls, Idaho and Northfork received warm critical praise, have crafted an inspiring family adventure tale that is subtle enough to swiftly ensnare audiences of all ages, inviting them to dream along with its protagonist.

The film centers on Charles Farmer (Billy Bob Thornton), a small-town Texas rancher who keeps himself busy building a rocket in his barn so as to eventually launch himself into orbit. His caring wife Audrey (Virginia Madsen) and his three children all stand behind him – at least until they find out that Charles has exhausted the family's finances to buy fuel for his rocket.

Farmer's unusual activities also catch the interest of the FBI, the Federal Aviation Administration, and even of the Texas Department of Family and Protective Services. After classifying Farmer's project as a national security threat, the government tries to shut everything down. Charles stands firm. He hires a lawyer (Tim Blake Nelson) whose first move is to attract lots of media attention.

“When I was a kid they used to tell me I could be anything I wanted to be, no matter what, ” Farmer tells the heads of the FAA at a hearing. The Polish brothers supply him with an array of sophisticated quotes, thus creating a hero that is paradoxically down-to-earth while (at least some of the time) having his head way up in the clouds.

Throughout it all, the filmmakers cleverly dodge corny situations and formulaic dialogue, combining humor, suspense, and tragedy to create a gripping fable.

Ultimately, The Astronaut Farmer goes one step further than most inspirational mainstream family films – and that is what substantially increases its credibility. The Polish brothers, for instance, never shy away from depicting several fierce confrontations sparked by Farmer's intransigence. And as a plus, the story never goes too far over the top despite several surprising twists.

In spite of its routine final act, The Astronaut Farmer brings to life a type of family film that has been long forgotten. This fable of perseverance hits the mark by conveying its message without appealing to narrative clichés or unnecessary schmaltz. As Farmer wisely puts it: You better know what you wanna do, before somebody knows it for you. The Polish brothers sure knew what they were doing.