Is the astronaut Farmer a true story 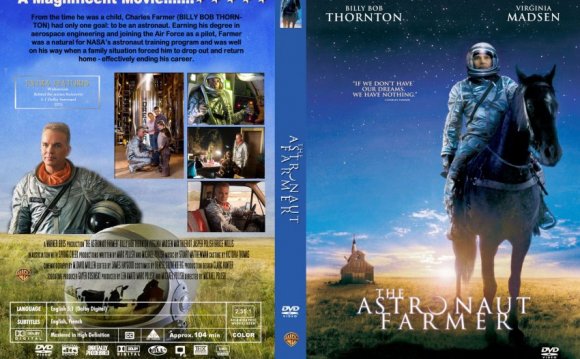 OK, don't make a mistake: this isn't really a movie about space. "The Astronaut Farmer" is the quintessential American Story. That's right; it's the classic, archetypical, consummate, perfected American myth, served up in packaging so homespun, you'll wonder that the actors aren't dressed in quilts.

When it comes to this movie's theme, you already know the drill, because during your childhood, Hollywood sauteed your tender brain with the potboiler genre known as the Western. And what was the icon of the Western? A rugged individual, hard as tool steel on the outside, and soft as warm Jell-O within; a slouch-hatted pioneer who faced off against the dangerous peoples and broken topography west of the Missouri. A lone man who would ride into town, solve everyone's problems, and then ride out of town, preferably at sunset.

It's the American myth, the Horatio Alger genotype: you can be whatever you want to be, if you just apply yourself. And you can do it without - and sometimes in spite of - the government. [IMAGES: View scenes from the film.]

So as the music fades up on this film, we see Bill Farmer riding into town, a hero who wants to trade the western frontier for the final frontier. Farmer (who, despite the suggestive name, is actually a rancher) has a deep, philosophical affection for space. He even made it as far as NASA's astronaut program, but washed out because he preferred attending to his family over attending rocket-jockey school.

But now the kids are older, and Farmer still wants to take a spin around the planet. So rather than going the easy and fashionable route - namely, paying the Russians $20 million and hitching a ride to the International Space Station - Farmer aims to become a freelance astronaut. He figures he can single-handedly accomplish in a year or two what it took tens of thousands of NASA engineers a decade to pull off. That's right: he's going to weld up a rocket in the backyard barn, strap himself in, pull the g's, and haul himself (and ten thousand parts) into orbit . After a lap or two around the globe, he'll fire the retro's, parachute back to his Texas ranch in a padded capsule, kiss the kids, and live contentedly ever after. Have a nice day.

Now anyone who has any idea of the complexity of a modern rocket will find this premise risible. You might as well posit that a Navy pilot who's washed out of "Top Gun" class will bolt together an F-14 Tomcat in his garage, and fly it to the nearest carrier.

But feasibility isn't what this is about. The film is a nod to the growing clout of commercial space companies - efforts like Burt Rutan's Scaled Composites, Peter Diamandis' X-Prize, and Jeff Bezos' Blue Origin. Yesterday, if you wanted a ride into space, you had only one type of vendor: the national space agencies. Tomorrow will be different.

The desirability of privatizing the launch industry is often described with the chestnut that "if aviation had remained in the hands of government, a flight from New York to San Francisco would cost $500 million, and refueling and retooling the plane for the flight back would take three weeks." Of course, this sarcastic metaphor ignores fundamental differences between aviation and spaceflight, but it appeals to the American psyche because it's consonant with The Myth. "Leave it to a big organization, and you'll get glacial progress at immense cost."

Needless to relate, it's simply not true that the lone-wolf entrepreneur can inevitably beat the bureaucracy, although there are plenty of encouraging examples. Consider FedEx versus the Postal Service. Or Craig Venter's race against the U.S. Government to sequence the human genome. We like our slouch-hatted, iconoclastic heroes, even if their experience is atypical.

2 Frightening True Stories - The Farmer and the Psychic ...

The Story of a farmer and his true love