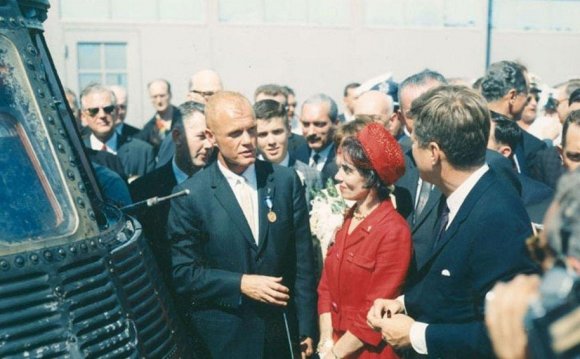 The pioneering engineers and scientists behind Explorer I celebrate the launch

By 1958, NASA, the newly created National Aeronautics and Space Administration, led U.S. efforts to explore space and prepare for future human missions to the Moon. Three important robotic programs were conducted from 1959-1969 to prepare for the first human landing:

Ranger missions (1-9) were the first U.S. attempt to obtain close-up images of the Moon. Images were taken and transmitted to Earth up to the final moments before impact.

The Lunar Orbiter spacecraft (1-5) successfully photographed 99% of the Moon's surface and imaged 20 potential lunar landing sites proposed for the Surveyor and Apollo missions.

The Surveyor probes (1, 3, 5-7) were the first U.S. spacecraft to land safely on the Moon. Their objectives were to obtain close-up images of the surface and to determine if the terrain was safe for manned landings.
Source: lroc.sese.asu.edu