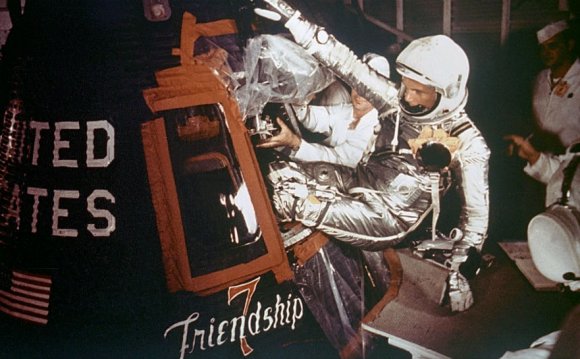 Null Historians' descriptions of the time describe a mood that seems almost alien now: a nation of people fearful of Soviet attack (the Cuban missile crisis would happen eight months later), glued to their black-and-white TV sets, watching a man in a silver spacesuit climb into a tiny capsule and disappear into the sky.

It was likened to single combat. The Soviets were Goliath. Glenn was David.

"We hadn't really thought that any nation could even touch us technically, " Glenn said in a 1998 interview with ABC News. "And all at once, here was this bunch of Soviets over there, for heaven's sake, outdoing the United States of America in technical and scientific things."

After the flight of the Soviet cosmonaut Yuri Gagarin in May 1961, Kennedy had committed the United States to landing a man on the moon by the end of the decade. Glenn later said he wondered at the time how NASA would pull it off.

The Atlas rocket that would launch his Mercury capsule was famously unreliable; it had blown up on several test flights. The astronauts had volunteered to leave Earth, but they also planned to return.

Glenn named his spacecraft Friendship 7, honoring his fellow astronauts. He would make three orbits of the earth. His launch was scheduled and scrubbed no fewer than 10 times in four months.

The Flight of Friendship 7

And then it was launch day - Feb. 20, 1962. Glenn woke early, had breakfast, put on his pressure suit and climbed into Friendship 7 before dawn. The countdown moved toward zero. In the control center, Glenn's backup pilot, Scott Carpenter, keyed a microphone and said, "Godspeed, John Glenn."

Glenn did not hear him; Carpenter was not on his radio link. Instead, he felt a jolt as the rocket left the launch pad. "Roger, liftoff, and the clock is running. We're under way."

John Glenn, the first American to orbit the Earth.

The Atlas did not fail. Five minutes later, he was in orbit.

The nation hung on every moment of his flight, one man, alone in the void, in a capsule so small (6 feet in diameter at the base) that he could not stretch out his arms. He reported that weightlessness was pleasant. He marveled at the "fireflies" - later determined to be flecks of frost - that drifted away from Friendship 7 when he rapped on the hull of the spacecraft.

Glenn was having a wonderful time. But then, trouble. As he began his second orbit, Mission Control received a signal suggesting that the heat shield, designed to prevent the capsule from burning up during reentry, had come loose. Worried controllers feared they might lose Glenn. They ordered him not to jettison the capsule's retro rockets, strapped on over the heat shield, after he fired them to descend from orbit.

The outside of the capsule heated to 3, 000 degrees as the atmosphere slowed it. Glenn watched as chunks of debris flew past the window and wondered whether it was the retro pack breaking up, or the heat shield.

It held. He splashed down safely in the Atlantic Ocean. America had probably seen nothing so daring since the transatlantic flight of Charles Lindbergh.

Crowds mobbed him at a ticker-tape parade in New York. Kennedy, who saw Glenn's star power, welcomed him at the White House. He returned to work at NASA and lobbied for another flight, but the Kennedy administration had quietly let his bosses know he was too much of a national icon to risk in space again.

The Americans would gradually overtake the Soviets in space. Neil Armstrong walked on the moon in 1969. But we no longer live in the space age. Glenn has complained publicly that since the space shuttles were retired last year, America has not had a way to launch its own astronauts into orbit. And Glenn's mantle as hero has only taken him so far; a run for president in 1984 left him in debt for years.

John Glenn is 90 now, dividing his time between Washington and Ohio after a long career in the U.S. Senate. He and his wife Annie have been married for 69 years, slowed only by the inevitable maladies of age.

Glenn did, after years of lobbying, get to fly on a space shuttle mission in 1998. He was 77 by then, arguing that the effects of weightlessness - bone and muscle loss - are similar to the effects of aging. While he was in orbit he said he was having such a good time that he might like another flight after that, but Annie, visibly angry, put a quick stop to that.