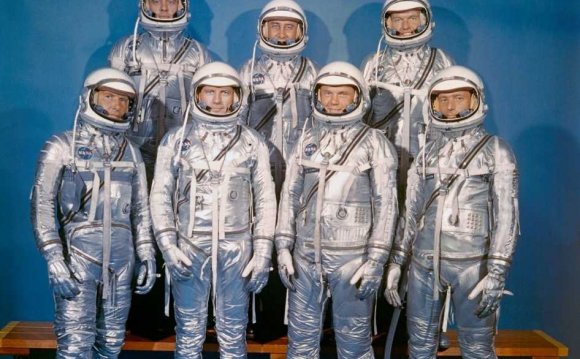 Mercury was NASA's first human spaceflight program. Its major aim was to see if humans could function effectively in space for a few minutes or hours at a time. Each mission flew only one person at once into space, starting with 15-minute long missions and gradually expanding to a day's time.

The first seven astronauts were chosen in 1959, and they and their families instantly became worldwide celebrities. Their fame was further enhanced with an exclusive contract with Life magazine for $500, 000 (or about $4 million today). The stories painted the astronauts as American heroes fighting communism with their space missions.

The PR was part of the Mercury program's push to fly a man in space before the Soviet Union did. While Mercury failed in that aim, it did provide a technological basis for the more challenging orbital missions of Gemini and the moon missions of Apollo that took place later in the 1960s.

There were several tests of the Mercury spacecraft before humans were put on board. The first living creature to fly on Mercury was not a test pilot, but a chimpanzee.

The chimp, named Ham (an acronym for Holloman Aerospace Medical Center), blasted off aboard a Mercury Redstone rocket on Jan. 31, 1961. NASA officials wanted to fly Ham first in case the flight ran into technical problems, which it did. The spacecraft flew higher and faster than anticipated and splashed down more than 400 miles off course, but Ham emerged healthy except for mild dehydration and fatigue. [Related: Laika the Dog & the First Animals in Space]

After one more test flight on March 24, NASA felt ready to bring its first astronaut into space. That person was Alan Shepard, a World War II veteran and Navy test pilot. When he lifted off on May 5, 1961, for a suborbital flight, his milestone came just weeks after the first man (a Russian, Yuri Gagarin) made it into space on April 12.

Shepard's 15-minute flight aboard Freedom 7 was a success, but he was frustrated at not making it first. "We had 'em, " Shepard is reported to have said about the Soviets at the time. "We had 'em by the short hairs, and we gave it away."

Mercury's next flight on July 21, 1961, ran into a major snag. Gus Grissom's Liberty Bell 7 performed relatively well on the 15-minute suborbital hop until splashdown, when the door unexpectedly blew open. Grissom found himself in the water as the recovery helicopter tried in vain to rescue the spacecraft. The cause of the door problem was never found. Sadly, Grissom died in a launch pad fire aboard Apollo 1; one factor in his death was a hatch door his three-person crew could not open.