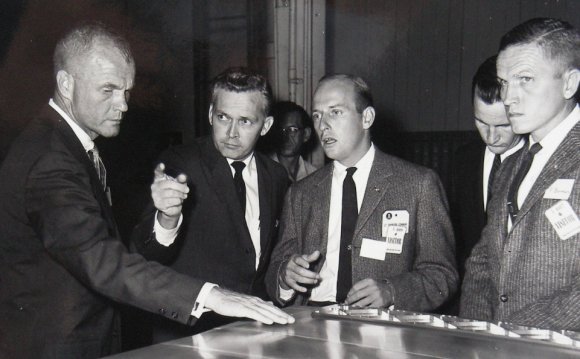 Charles "Pete" Conrad was a true buccaneer of the space age. He drove fast cars, enjoyed fast planes and selected his first words on the moon to win a bet with a journalist. (He never collected on the money.)

Conrad flew four times in space, but is best remembered as the commander of Apollo 12 – the second mission to the moon. He steered the lunar module Intrepid to the first pinpoint landing, just a little ways down from the unmanned spacecraft Surveyor.

Conrad died in 1999 from injuries sustained during a motorcycle crash.

Growing up in the 1930s and 1940s, Conrad struggled with dyslexia. The reading disorder was not known at the time outside of a few medical journals, prompting teachers to call him lazy despite his best efforts, according to the biography "Rocketman" that was co-written by his wife, Nancy.

"Math and science may have been a snap for the boy who loved moving parts and connecting wires and helping Morris tune a carburetor. But middle school at Haverford was and is about reading: Hawthorne, Tennyson, Chaucer ... There weren't any moving parts here, " the biography stated.

As he grew older, Conrad developed coping mechanisms and successfully earned an aeronautical engineering degree from Princeton. Conrad's first job after university was in the Navy. He was trained as a test pilot and also became a flight instructor and performance engineer at the Navy's famed test pilot school in Patuxent River, Maryland, which generated many of the early astronauts.

NASA selected Conrad as a candidate for the first group of Mercury astronauts, but Conrad's reported dismissive attitude towards some of the medical tests led to his disqualification. In 1962, he tried again – a lot of those tests had been dropped in the meantime – and was picked as part of the second group of astronauts.

In short order, Conrad ratcheted up two missions in space: Gemini 5, which then set a space endurance record in its eight days in space, and Gemini 11, which flew higher above Earth than any other spacecraft that came before it.

Apollo 12 in 1969 went through a few adventures even before it left Earth. Conrad's first moments commanding the mission were marked by a lightning strike that temporarily affected the computer. Mission Control quickly radioed up a fix and the mission proceeded normally, save for a few extra checks when the astronauts were about to leave orbit for the moon.

Conrad and Alan Bean descended toward the Ocean of Storms on Nov. 19, while Richard Gordon orbited the moon in the command module. The lunar lander touched down close by the unmanned Surveyor spacecraft – one of the primary targets, as NASA wanted a piece of the machine to see how well it was holding up in the harsh lunar environment.

Multiple sources say Pete Conrad's first words on the moon when walking on the moon came from a bet that he made with journalist Oriana Fallaci, who believed that NASA would script those first few moments. Conrad, who was only 5 feet 6 inches (167 centimeters) tall, cried out: "Man, that may have been a small one for Neil, but that's a long one for me."

Fallici was supposed to pay Conrad $500 in 1969 dollars (the equivalent of more than $3, 100 today), but Conrad said he never received the money.

A television camera and several other pieces were taken from Surveyor 3 and brought back to Earth for scientific examination. Here, Apollo 12 moonwalker, Pete Conrad, examines the Surveyor’s TV camera before detaching the gear.