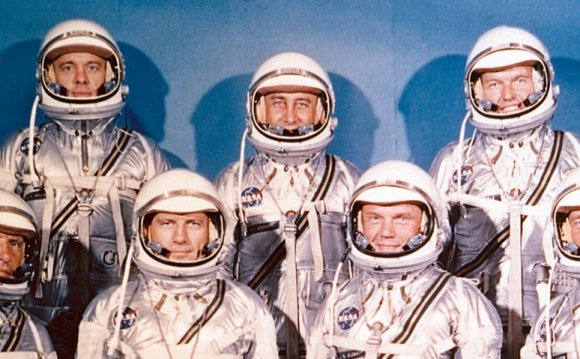 Below is an image of the return capsule they were in as the re-entered Earth's atmosphere:

Re-entering Earth's atmosphere is one of the most dangerous parts of a mission to and from space, but the three crew members looked to be in tip-top shape as they reclined in chairs to re-adjust their bodies to Earth's gravity.

After living for 6 months in a weightless environment, their bodies had undergone some rather unpleasant changes, including bone and muscle loss, which is why they're taking it easy as doctors perform standard medical tests on them.

The Expedition 42 crew rode a Soyuz spacecraft back home. Upon re-entry a spacecraft can reach about 3, 000 degrees Fahrenheit due to friction between the spacecraft and the molecules in Earth's atmosphere. The Soyuz has a heat shield on its bottom, which it aims at the ground to protect the capsule and its precious cargo during the bumpy ride.

Earth's atmosphere does have its perks, however: It slows the spacecraft down to the point where the crew can deploy the parachute and glide safely and slowly down to Earth's surface through, what appears to be, stratus clouds in the image below:

The astronauts landed in a snow-covered part of Kazakhstan, where they were then helped out of the tiny capsule and into some very comfy-looking chairs. It was a few degrees below zero outside when they landed, but Willmore seemed happy to just be home.

Cosmonaut Samokutyaev, shown below, marveled in the simple pleasure of fresh fruit according to Space.com:

"I am drinking tea with real lemon, " he said while sipping happily. "It's great."

Serova, shown below, is the first female Russian cosmonaut to ever board the International Space Station. She first climbed, or rather floated, onto the space station in Sept. 2014.

This return flight marks the 123rd mission using a Soyuz spacecraft. The first Soyuz mission was launched in 1967 — two years before NASA landed the first astronauts on the moon.