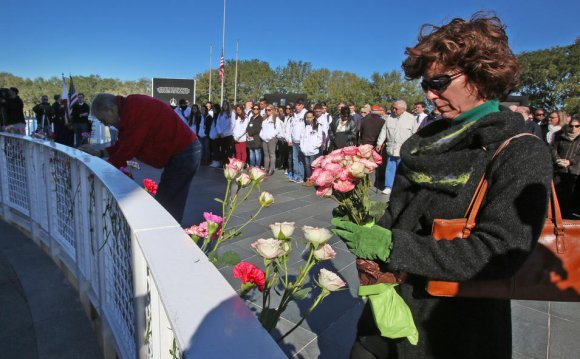 NASA will pay homage to its fallen astronauts Friday (Jan. 31) with an agency-wide "Day of Remembrance, " a ceremony that comes amid a somber week of spaceflight disasters for the space agency.

This week marks the anniversaries of three fatal NASA tragedies: the Apollo 1 fire of 1967, the space shuttle Challenger disaster of 1986 and the Columbia shuttle disaster of 2003. NASA chief Charlie Bolden — a former space shuttle commander — and other officials will pay respect to those lost in the accidents during a wreath-laying ceremony at Arlington National Cemetery Friday morning.

"NASA's Day of Remembrance honors members of the NASA family who lost their lives while furthering the cause of exploration and discovery, " NASA officials wrote in a statement. [NASA's Fallen Astronauts: A Photo Memorial]

Astronauts Gus Grissom, Ed White and Roger Chaffee were killed when a fire broke out in their crew capsule during a ground test on Jan. 27, 1967. The Apollo 1 accident led to an investigation of the Apollo spacecraft, and two years later, the Apollo 11 astronauts successfully landed on the moon.

On Jan. 28, 1986, 19 years and one day after the Apollo 1 fire, the space shuttle Challenger broke apart after liftoff due to an O-ring failure in one of the shuttle's two solid rocket boosters. Francis "Dick" Scobee, Ronald McNair, Mike Smith, Ellison Onizuka, Judy Resnik, Greg Jarvis and Connecticut teacher Christa McAuliffe were slain in the explosion. After the Challenger disaster — the first shuttle-related tragedy — It took three years for the space agency to fly shuttle missions again.

"There are many reasons the Challenger accident still resonates with the American public, " Hugh Harris, author of the new e-book "Challenger: An American Tragedy, The Inside Story from Launch Control, " told Space.com via email. "Challenger was the first time that American astronauts were lost during a space flight. It happened in front of thousands of people during launch at the Kennedy Space Center and millions more through television images that were played over and over."