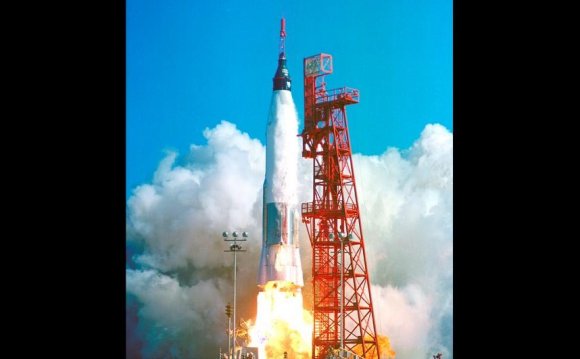 Where did Neil Armstrong grow up?

Neil was born on August 5, 1930 in Wapakoneta, Ohio. His love for flying started at a young age when his father took him to an air show. From then on his goal was to become a pilot. At the age of 15, he got his pilot's license.

Armstrong went to Purdue University and earned his bachelor's degree in aerospace engineering. He later got his masters degree at the University of Southern California. During college, Neil was called up by the Navy and became a fighter pilot. He fought in the Korean War where he flew fighters from aircraft carriers. At one point his plane was hit by enemy fire, but he was able to eject and was safely rescued.

How did he become an astronaut?

After graduating from college, Armstrong became a test pilot. He flew all sorts of experimental planes testing them out to see how well they flew. It was a dangerous job, but very exciting. He flew over 200 different types of aircraft during his career.

Armstrong applied to become an astronaut and in September of 1962 he was selected for the NASA Astronaut Corps. He had to go through a series of harsh physical tests, but he passed and was soon part of the "new nine", or second group of nine NASA astronauts.

Armstrong's first trip into space was aboard the Gemini 8. He was the command pilot of the space capsule and piloted the first successful docking of two vehicles in space. The mission was cut short, however, when the capsules began to roll.

Apollo 11 and Walking on the Moon

On December 23, 1968 Neil was offered the command of the Apollo 11. This would be the first manned landing on the Moon. This was an exciting time for the entire country. The United States was in a race with the Soviet Union to put the first man on the Moon. If the flight was successful, Armstrong would be that man.

The Apollo 11 lander, the Eagle, on the Moon

After months of practice and preparation, the Apollo 11 spacecraft launched from Kennedy Space Center in Florida on July 16, 1969. There was one scary moment in the flight where Armstrong had to take over manual control of the landing. This was not the plan and, if the landing took too long, would leave the crew short on fuel. The landing was successful and they had around 40 seconds of fuel remaining. Upon landing Armstrong said "Houston, Tranquility Base here. The Eagle has landed."

After landing, Armstrong was the first to leave the craft and walk on the Moon. The historic date was July 21, 1969. His famous words upon being the first man on the Moon were "That's one small step for man, one giant leap for mankind". Buzz Aldrin also walked on the Moon during this trip. They collected Moon rocks and were on the Moon for over 21 hours. While the lunar module, named the Eagle, was on the Moon, the third astronaut, Michael Collins, orbited the Moon in the command module.

The three pilots arrived back on Earth on July 24th. They landed in the Pacific Ocean and returned heroes.

Buzz Aldrin and the US Flag

After the Apollo 11 flight, Neil held many positions with NASA. He also worked as a professor of aerospace engineering at the University of Cincinnati.