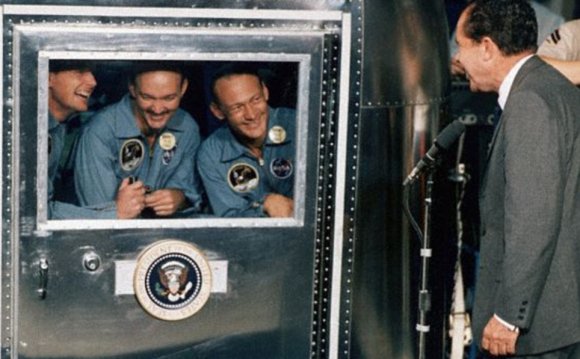 As Neil Armstrong and Edwin "Buzz" Aldrin took man's first steps on the moon, a third crew member orbited high above. Astronaut Michael Collins waited in the command module while his fellow astronauts spent more than 21 hours on the lunar surface, completely cut off from human contact on Earth. Here is a brief look at the life of the least-known member of the Apollo 11 crew.

The son of a U.S. Army major general, Michael Collins was born October 31, 1930, in Rome, Italy, where his father was stationed. The family later moved to the United States, and after high school, Collins enrolled at West Point Military Academy. After receiving a Bachelor of Science degree in 1952, Collins joined the Air Force, where he served as an experimental flight test officer at Edwards Air Force Base.

In 1962, after watching John Glenn's historic flight, Collins applied to become an astronaut. He was accepted with the third group in 1963.

Collins served as a pilot on Gemini 10, which launched July 18, 1966. The sixteenth crewed spacecraft to circle Earth, the mission's purpose was to conduct rendezvous and docking tests with two target vehicles, a booster launched earlier that day and a defunct booster left over from Gemini 8. During the mission, Collins performed two spacewalks, spending over an hour outside of the ship and becoming the first person to meet another craft in orbit.

When Apollo 8 orbited the moon in December 1968, Collins remained on Earth and served as the astronaut responsible for communicating with the crew from mission control.

For his second and final mission in space, Collins served as command module pilot for Apollo 11. While fellow astronauts Neil Armstrong and Buzz Aldrin traveled to the surface of the moon in the lunar module, Collins waited on board for 21 and a half hours. As the command module drifted behind the moon, cutting off his communication with Earth, he wrote:

"I am alone now, truly alone, and absolutely isolated from any known life. I am it. If a count were taken, the score would be three billion plus two over on the other side of the moon, and one plus God knows what on this side."

The Apollo 11 Command/Service module is photographed from the Lunar Module in lunar orbit during the Apollo 11 lunar landing mission.

In addition to dealing with his isolation, Collins also was concerned that the lunar module had never been fired on the moon. The astronauts knew there was a chance that Armstrong and Aldrin could remain stranded on the lunar surface or, if the engine didn't burn long enough, be lost in space, leaving Collins the sole survivor of the historic mission. President Nixon had even prepared a speech in case of such a tragedy.

But the engine on the lunar module worked flawlessly. At 1:54 p.m. EDT, the Eagle blasted back up to the command module. Collins performed the necessary docking maneuvers with the lunar module. Armstrong and Aldrin rejoined him, and the three astronauts returned home safely.

Collins spent a total of 266 hours — over 11 days — in space. He left NASA in 1970 and served as director of the National Air & Space Museum in Washington, D.C., for eight years before entering the private sector. He and his wife, Patricia, have three grown children.

In a press release for the 40th anniversary of the trip to the moon, Collins said he was happy with his seat on the Apollo 11 mission, calling it "an honor" to serve. In his notes while circling the moon alone, he wrote, "I feel very much a part of what is taking place on the lunar surface."

Apollo 11: First Men on the Moon

The Apollo 11 Astronauts Had To Fill Out Customs Paperwork ...