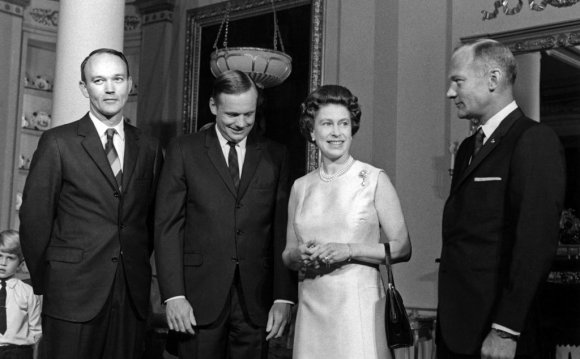 Apollo 11 astronaut Edwin Aldrin photographed this iconic photo, a view of his footprint in the lunar soil, as part of an experiment to study the nature of lunar dust and the effects of pressure on the surface during the historic first manned moon landing in July 1969.

The historic launch of the Apollo 11 mission carried three astronauts toward the moon. Two of them would set foot on the lunar surface for the first time in human history as millions of people around the world followed their steps on television.

The crew of Apollo 11 were all experienced astronauts. All three had flown missions into space before.

Col. Edwin Eugene "Buzz" Aldrin, 39, was the first astronaut with a doctorate to fly in space. Born Jan. 20, 1930, in New Jersey, Aldrin piloted Gemini 12, taking a two-hour, twenty-minute walk in space to demonstrate that an astronaut could work efficiently outside of the vehicle. For Apollo 11, he served as the lunar module pilot.

The command module pilot, Lt. Col. Michael Collins, 38, was born in Italy on Oct. 31, 1930. The pilot of Gemini 10, Collins spent almost an hour and a half outside of the craft on a space-walk and became the first person to meet another spacecraft in orbit.

From Earth to the moon

Mission planners at NASA studied the lunar surface for two years, searching for the best place to make the historic landing. Using high-resolution photographs taken by the Lunar Orbiter satellite and close-up photographs taken by the Surveyor spacecraft, they narrowed the initial thirty sites down to three. Influencing factors included the number of craters and boulders, few high cliffs or hills, and a relatively flat surface. The amount of sunlight was also a factor in determining the best time to land on the lunar surface.

Apollo 11 launched from Kennedy Space Center in Florida at 9:32 a.m. EDT on July 16, 1969. While in flight, the crew made two televised broadcasts from the interior of the ship, and a third transmission as they drew closer to the moon, revealing the lunar surface and the intended approach path. On July 20, Armstrong and Aldrin entered the lunar module, nicknamed the "Eagle" and separated from the Command Service Module — the "Columbia" — headed toward the lunar surface.

Apollo 11 astronaut Buzz Aldrin poses with the American flag on the surface of the moon in July 1969.

The lunar module touched down on the moon's Sea of Tranquility, a large basaltic region, at 4:17 p.m. EDT. Armstrong notified Houston with the historic words, "Houston, this is Tranquility Base. The Eagle has landed." For the first two hours, Armstrong and Aldrin checked all of the systems, configured the lunar module for the stay on the moon, and ate. They decided to skip the scheduled four-hour rest to explore the surface.