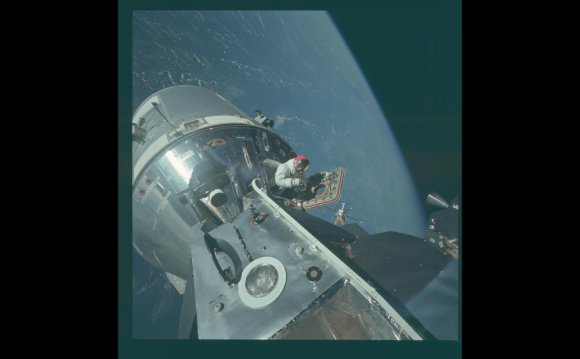 The theory that the moon landings were hoaxed by the US government to assert their victory in the space race over Russia, is something which has grown in popularity over time.

Recent polls indicate that approximately 20% of Americans believe that the U.S. has never landed on the moon. After the Apollo missions ended in the seventies, why haven’t we ever been back? Only during the term of Richard Nixon did humanity ever land on the moon, and after Watergate most people wouldn’t put it past Tricky Dick to fake them to put America in good standing in the Cold War.

In this list I have presented some of the proposed evidence to suggest that the moon landings were hoaxes. I tried to include NASA’s explanations to each entry to provide an objective perspective.

Conspiracy theorists have pointed out that when the first moon landing was shown on live television, viewers could clearly see the American flag waving and fluttering as Neil Armstrong and Buzz Aldrin planted it. Photos of the landing also seem to show rippling in a breeze, such as the image above which clearly shows a fold in the flag. The obvious problem here is that there’s no air in the moon’s atmosphere, and therefore no wind to cause the flag to blow.

Countless explanations have been put forward to disprove this phenomenon as anything unusual: NASA claimed that the flag was stored in a thin tube and the rippled effect was caused by it being unfurled before being planted. Other explanations involve the ripples caused by the reaction force of the astronauts touching the aluminum pole, which is shown to shake in the video footage.


The claim goes as follows: had NASA really landed us on the moon, there would be a blast crater underneath the lunar module to mark its landing. On any video footage or photograph of the landings, no crater is visible, almost as though the module was simply placed there. The surface of the moon is covered in fine lunar dust, and even this doesn’t seem to have been displaced in photographic evidence.

Much like the waving flag theory, however, the lack of an impact crater has a slew of potential explanations. NASA maintains that the module required significantly less thrust in the low-gravity conditions than it would have done on Earth. The surface of the moon itself is solid rock, so a blast crater probably wouldn’t be feasible anyway – in the same way that an aeroplane doesn’t leave a crater when it touches down on a concrete airstrip.


On the moon there is only one strong light source: the Sun. So it’s fair to suggest that all shadows should run parallel to one another. But this was not the case during the moon landing: videos and photographs clearly show that shadows fall in different directions. Conspiracy theorists suggest that this must mean multiple light sources are present -suggesting that the landing photos were taken on a film set.

NASA has attempted to blame uneven landscape on the strange shadows, with subtle bumps and hills on the moon’s surface causing the discrepancies. This explanation has been tossed out the window by some theorists; how could hills cause such large angular differences? In the image above the lunar module’s shadow clearly contradicts that of the rocks in the foreground at almost a 45 degree angle. 7

In order to reach the moon, astronauts had to pass through what is known as the Van Allen radiation belt. The belt is held in place by Earth’s magnetic field and stays perpetually in the same place. The Apollo missions to the moon marked the first ever attempts to transport living humans through the belt. Conspiracy theorists contend that the sheer levels of radiation would have cooked the astronauts en route to the moon, despite the layers of aluminum coating the interior and exterior of the spaceship.

NASA have countered this argument by emphasizing the short amount of time it took the astronauts to traverse the belt – meaning they received only very small doses of radiation.


After photographs of the moon landings were released, theorists were quick to notice a mysterious object (shown above) in the reflection of an astronaut’s helmet from the Apollo 12 mission. The object appears to be hanging from a rope or wire and has no reason to be there at all, leading some to suggest it is an overhead spotlight typically found in film studios.

The resemblance is questionable, given the poor quality of the photograph, but the mystery remains as to why something is being suspended in mid-air (or rather lack of air) on the moon. The lunar module in other photos appears to have no extension from it that matches the photo, so the object still remains totally unexplained.

In order to support claims that the moon landings were shot in a studio, conspiracy theorists had to account for the apparent low-gravity conditions, which must have been mimicked by NASA. It has been suggested that if you take the moon landing footage and increase the speed of the film x2.5, the astronauts appear to be moving in Earth’s gravity. As for the astronaut’s impressive jump height, which would be impossible to perform in Earth’s gravity, hidden cables and wires have been suggested as giving the astronauts some extra height. In some screenshots outlines of alleged hidden cables can be seen (the photograph above supposedly shows a wire, though it is extremely vague).


One compelling argument for the moon landing hoax is the total lack of stars in any of the photographic/video evidence. There are no clouds on the moon, so stars are perpetually visible and significantly brighter than what we see through the filter of Earth’s atmosphere.

The argument here is that NASA would have found it impossible to map out the exact locations of all stars for the hoax without being rumbled, and therefore left them out – intentionally falling back on an excuse that the quality of the photographs washes them out (an excuse they did actually give).

Some photographs are high-quality, however, and yet still no stars are shown. Certainly eerie, considering you can take pictures of stars from Earth in much lower quality and still see them.

One of the most famous photos from the moon landings shows a rock in the foreground, with what appears to be the letter “C” engraved into it. The letter appears to be almost perfectly symmetrical, meaning it is unlikely to be a natural occurrence. It has been suggested that the rock is simply a prop, with the “C” used as a marker by an alleged film crew. A set designer could have turned the rock the wrong way, accidentally exposing the marking to the camera.

NASA has given conflicting excuses for the letter, on the one hand blaming a photographic developer for adding the letter as a practical joke, while on the other hand saying that it may simply have been a stray hair which got tangled up somewhere in the developing process.
2

The cameras used by astronauts during the moon landings had a multitude of cross-hairs to aid with scaling and direction. These are imprinted over the top of all photographs. Some of the images, however, clearly show the cross-hairs behind objects in the scene, implying that photographs may have been edited or doctored after being taken. The photograph shown above is not an isolated occurrence. Many objects are shown to be in front of the cross-hairs, including the American flag in one picture and the lunar rover in another.

Astronaut Moon Landing And Ground Crew Back On Earth ...