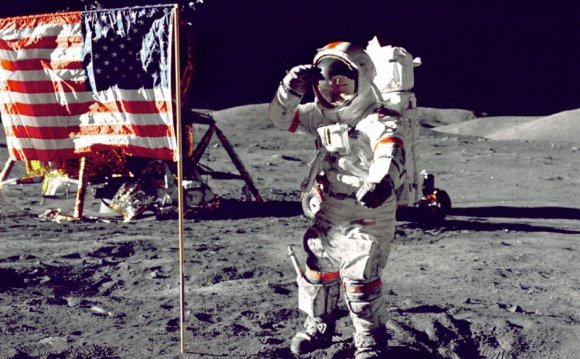 REUTERS/NASA/Handout Apollo 11 astronaut Neil Armstrong captures his shadow while taking a photo of the lunar module on the surface of the moon in this photo from July 20, 1969.Sunday, July 20, marks the 45th anniversary of the Apollo 11 moon landing, when American astronaut Neil Armstrong became the first person ever to plant boots on the dusty lunar surface. Buzz Aldrin followed about 20 minutes later.

Most people assume that NASA always planned for Armstrong to be the first person to step out onto the moon because of his rank. Armstrong was commander of Apollo 11 and Aldrin was the lunar module pilot. Michael Collins stayed behind in lunar orbit as command module pilot.

In a recent, Aldrin, now 84, admitted that he, as the junior person, actually vied for the spot to be first man on the moon.

"In all previous missions, if someone, a crew member, was to spacewalk, it was always the junior person, not the space commander who would stay inside, " Aldrin said. "I felt that there was an obligation on my part to put forth the reasons why a commander who had been burdened down with an enormous amount of responsibility and training for activities [should stay inside]."

Aldrin noted that at least one team at NASA supported his argument for why the junior person should step outside first, leaving the more senior person safely behind the controls and in a better position to take action in an emergency.

"But, " Aldrin explains, "many people felt the great symbology of the commander from past expeditions or arrivals at a destination." So Armstrong climbed down the ladder first. However, Aldrin notes that once both astronauts were outside the lunar module their roles became more ambiguous even though Armstrong was the de facto leader of the mission.

The decision that was made was absolutely correct as far as who went out first, symbolically. However who was in charge of the what happened after both people are outside, I believe, could have been done differently. I was not the commander, I was a junior person, so once both [we] were outside, I followed my leader, because we (NASA) had not put together detailed jobs of people outside. I believe it could have been improved. But it was very successful for what it was. And the decision wasn't up to me, or Neil, it was up to people much higher up in NASA.

NASA's history website, "Apollo Expeditions to the Moon, " tells a slightly different version of the story. The agency originally predicted that Aldrin would be the first man to step on the moon, but the lunar module posed logistical challenges that made this order impossible. The hatch opened on the opposite side where Aldrin was seated. "For Aldrin to get out first it would have been necessary for one bulky-suited, back-packed astronaut to climb over another, " NASA wrote. "When that movement was tried, it damaged the LM mockup."

Deke Slayton, the astronauts' boss, said allowing Armstrong to walk first was a basic protocol change. "I figured the commander ought to be the first guy out, " he said. "I changed it as soon as I found they had the time line that showed Aldrin getting out first." The first director of NASA's Manned Spacecraft, Bob Gilruth, approved the decision, Slayton is quoted as saying.

In the same account, Armstrong said he was never asked by the higher-ups if he wanted to be the first man out and the decision was not based on rank. "Did Armstrong pull rank, as was widely assumed? Absolutely not, said Slayton, " NASA writes. According to the historical account, Aldrin later wrote ( half-convincingly): "It was fine with me if it was to be Neil."

US astronaut Neil Armstrong, the first man on the Moon ...

Astronaut Neil Armstrong first set foot on the moon, has ...