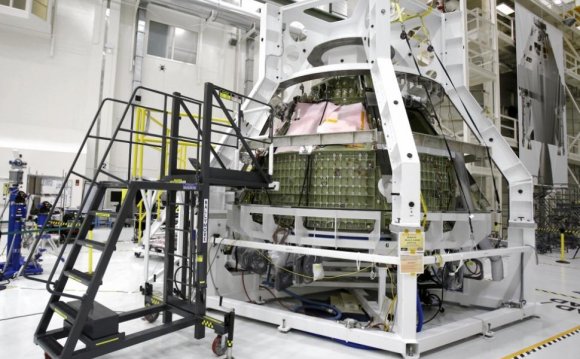 You could almost feel his lip quiver.

"As we welcome home Atlantis and her crew, " he blubbers, "we recognize that though our shuttle program is over, our space program must live on. Many of our dedicated space shuttle workers throughout the country face uncertain job prospects ... We owe them for a job well done. We owe it to them to continue exploring outer space. Click here to sign an online thank-you card to all of NASA's shuttle astronauts and employees who contributed to the success of the program."

Isn't this all coming a tad late, Senator? Seems to me we "owe" our space shuttle workers more than a smarmy group kiss led by Candidate Disappointment panning for votes.

The one Floridian close enough to the president of the United States to have kept NASA and the Kennedy Space Center in the president's face and maybe, just maybe, could have persuaded him to rethink his decision ... somehow managed to do just enough yet not enough. Just enough to convince some on the Space Coast he was working to save their jobs. Not enough to sacrifice his president's warm embrace or the pipeline to national-party cash.

Anywhere from 10, 000 to 25, 000 Florida jobs will evaporate because we're no longer looking to set up science labs on the Moon, we're going to Mars. And by the time we get there, most of the jobs that send up the rockets will have gone to other states. As President Obama said in 2009, "Everybody wants a piece of the action."

Everybody wants a piece of the action. Pretty pathetic, isn't it? Who cares what anybody else wants? It took Florida more than five decades to build this network of know-how. You're looking for aeronautical and space development? The Space Coast has the finest skilled labor in the world. It has bought-and-paid-for infrastructure, hundreds of supporting businesses and industries, and it has communities that understand how to ride out the rough weather that military rigidity and political whim sometimes whip up around them.

Nobody, no region in America or in the world, does space better.

Bill Nelson knows that. He is one of only two members of Congress ever to orbit the Earth, was a payload specialist on space shuttle Columbia's STS-61-C mission from Jan. 12-18, 1986. You would think, wouldn't you, that he would have challenged the proposed dismantling of a Florida icon. Why didn't he take ownership of the shuttle program's plight?

There was a time when I thought this senator was going to come through. A year ago he and Kay Bailey Hutchison of Texas supported Sen. John Rockefeller's bill to pump more money into the space program and keep the International Space Station open until 2020. But that was it. That was his whole offense. He was shooting a cap pistol when he needed an Uzi.

And in the end Obama never wavered from his decision to end NASA's moon program, turn over space transportation to commercial companies and jump-start technologies needed for future human exploration of Mars.

Nelson apologists kept telling me the senator was on the wrong committees to be of real service to the Space Coast. They told me Florida would have lost more if it hadn't been for their guy. They told me he always fought hard to save the national space program for Florida, but that objections to how much it cost in this worst economy in more than 70 years were a tough nut to crack.

NASA payouts are insignificant compared to total federal government expenditures. We spend less than $20 billion a year on NASA, which represents less than 0.6 percent of total government expenditures. So, even eliminating NASA altogether - taking it out of the budget as if it never existed - you wouldn't come close to reducing total federal spending by even 1 percent.

But because our federal investment in space technology creates more wealth than it consumes, terminating federal expenditures on space would make this country poorer and certainly less technologically advanced.

There's a good reason why Russia, China, Europe, Japan, South Korea, Taiwan, Brazil, India, Israel and Iran are all investing in space technology. It's an investment that makes a country richer and stronger and more prepared for whatever comes tomorrow.

Money should not be an argument.

Even the Florida Legislature realized that. In 2010, despite limited resources, the Legislature increased space-program funding by more than 600 percent. The idea was to send a strong message that Florida is serious about not only retaining its status as the gateway to space in America, but building its world markets as well.

Jeff Kottkamp was lieutenant governor in 2010. He served as chairman of Space Florida from 2007-2011 and led the efforts to grow and expand the aerospace industry in Florida. If you haven't read Kottkamp's well-thought-out column on the end of the shuttle program, you might want to have a look.

The bottom line for me is, when an elected official knows the fight is right, when the stakes are as high as they are right now on Florida's Space Coast, and when Bill Nelson has more power than anyone else to fight and win, he owes his constituents all he's got. Nothing less.

I keep remembering the courage of Sen. Barry Goldwater way back when. Like him or not, agree with him or not, this was a senator with the guts to buck his party and his president. Goldwater, dead against America recognizing "Red China" and at odds with President Richard Nixon over at least half a dozen issues, made a very public, very deliberate, absolutely unforgettable statement to radio and television reporters about the president of the United States.

Said Goldwater tersely, "As far as I'm concerned, Nixon can go to China and stay there."

In a long-ago interview, Bill Nelson told me that his favorite book was John F. Kennedy's "Profiles in Courage" - stories of senators who risked their careers to say and do the right thing. "Reading that book was one of the great inspirations in my life, " he said.

Sen. Bill Nelson Says Congratulations on 100 Years to the ...