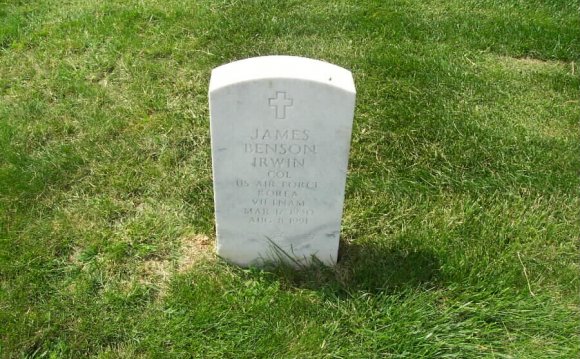 James B. Irwin, an astronaut who walked on the moon in 1971 and later founded an evangelical religious organization, died Thursday night at Valley View Hospital in Glenwood Springs, Colo. He was 61 years old and lived in Colorado Springs.

A spokeswoman for Mr. Irwin in Colorado Springs, Nancy Metz, said he had died of a heart attack.

Mr. Irwin said that his experience exploring the moon on the Apollo 15 mission in July 1971 moved him to devote the rest of his life to "spreading the good news of Jesus Christ." He resigned from the astronaut corps a year later and became the founding president of High Flight Foundation, an interdenominational evangelical organization based in Colorado Springs.

To church groups around the country, Mr. Irwin often spoke of the lunar mission as an epiphany, declaring, "I felt the power of God as I'd never felt it before." Quoting Scripture on Moon

While on the moon, at the end of the first day exploring the rugged lunar highlands, Mr. Irwin said he was reminded of "my favorite Biblical passage from Psalms." Speaking by radio to Mission Control in Houston, he began quoting the passage, "I'll look unto the hills from whence cometh my help, " and added quickly, "but, of course, we get quite a bit from Houston, too."

The remark was typical of the seriousness and awe with which Mr. Irwin, then a lieutenant colonel in the Air Force, approached the task of exploring the moon, as well as the enthusiasm and good humor that he conveyed throughout the mission. He and Col. David R. Scott of the Air Force were the seventh and eighth Americans to walk on the moon. It was Mr. Irwin's only space mission.

He established High Flight, a nonprofit organization, with his pastor, the Rev. William H. Rittenhouse, a Baptist. The organization operates religious retreats and tours to the Holy Land. In addition to traveling widely and making speeches to raise money for High Flight and to share his experiences as an astronaut and a devoted Christian, he wrote a book on the experiences, "To Rule the Night."

On two occasions he led expeditions to Mount Ararat in Turkey in search of evidence of Noah's Ark. In 1982, he reached the 16, 946-foot summit but fell on the glacier, suffering severe leg and face lacerations. He had to be carried down on horseback.

A year later, he surveyed the summit by airplane, looking for possible remains of the ark, which, according to the Book of Genesis, came to rest on the "mountains of Ararat."

"It's easier to walk on the moon, " Mr. Irwin said. "I've done all I possibly can, but the ark continues to elude us." Heart Attack at 43

Mr. Irwin had known accidents and injury before. Ten years before his Apollo mission, his aircraft crashed on a routine training flight, leaving him with two broken legs, a broken jaw and a concussion that wiped out his memory. It took extensive psychiatric treatment and hypnosis to restore the lost memory and enable him to resume flying, 14 months later.

While on the moon, both he and Mr. Scott experienced brief spells of irregular heart rhythm, probably a result of extreme fatigue. Less than two years later, at the age of 43, Mr. Irwin suffered a serious heart attack while playing handball. Since then, he has developed a history of heart problems.

Space agency doctors said they doubted that the attack could be attributed in any way to space flight. They noted that preflight testing had shown Mr. Irwin to be prone to slight uneven heartbeats on occasion after exercise. 1951 Annapolis Graduate

James Benson Irwin was born March 17, 1930, in Pittsburgh, the eldest son of a plumber. His family moved to Florida and then to Salt Lake City, where Mr. Irwin attended high school. The family later moved to San Jose, Calif., where he met the woman he would marry, Mary Ellen Monroe, a photographer's model.

His mother had wanted him to be a preacher, but a brief ride in an old barnstorming plane when he was four years old had turned his mind to flying.

After graduation from the United States Naval Academy in 1951, Mr. Irwin was commissioned an officer in the Air Force but his request for pilot training was turned down.

Mr. Irwin spent several years at military desk jobs before he was finally admitted to the Air Force test pilot school. He also earned a master's degree in aeronautical and instrumentation engineering from the University of Michigan in 1957. He first applied to be an astronaut in 1964, but was rejected twice before he was accepted in 1966.

On the Apollo 15 mission, Colonel Irwin and Colonel Scott were the first astronauts to use a battery-operated, four-wheel runabout, Rover 1, in moving about on the lunar surface. This enabled them to collect 175 pounds of rocks and soil from widely scattered sites near the lunar Appennine Mountains. The third member of the crew, Maj. Alfred M. Worden, piloted the Apollo command module in lunar orbit while the other two astronauts were on the surface.