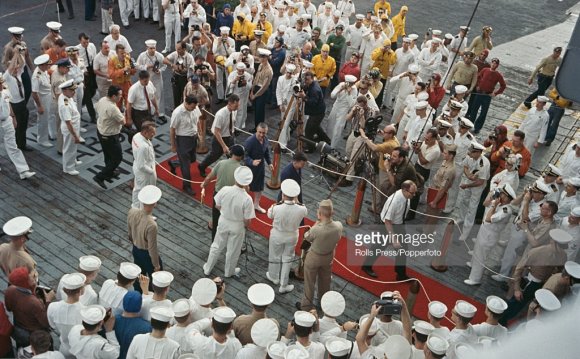 This shrine to America's space heroes opened in 1990. It used to be down the coast, in Melbourne, run by a corporation - until its owners went into foreclosure with millions of dollars in unpaid debt. Privatization having been tried, and failed, the operation was turned over to NASA, which seems to be doing a decent job. The attraction has at least been moved to a much better location in Titusville, just outside of the entrance to the Kennedy Space Center.

Following the model set by sports hall of fames, this is not just a hall of fame. It is a hall of fame plus an extensive collection of Astronaut memorabilia - the world's largest - which makes it a must-see for space geeks (like us). If you're excited by the prospect of seeing Deke Slayton's Mercury survival knife ("The Astronaut Special, " said to be tough enough to cut through the skin of a sinking capsule) then this is the place for you.

There are some problems with the presentation. We recall the space program as place of bright white clean rooms, white-coated technicians, and well-lit photo opportunities. Whoever designed the United States Astronaut Hall of Fame watched too many episodes of Star Trek: The Next Generation, reproducing the sci-fi noir interior of a Borg cube. The result is a photo-awful nightmare of dark spaces, with plexiglass reflecting back all of the halogen track lighting and neon signs. To make matters more uncomfortable, an audio barrage chases you from room to room: subsonic rocket roar, hippie music, snippets of Nixon and Kennedy speeches, garbled in-space astronaut voices, and repeated loops of countdowns. War on Terror interrogators may have honed their sensory-assault skills here.

Exhibits such as Jim Lovell's boy scout sash and Buzz Aldrin's high school football jersey emphasize the human side of our superhuman spacemen, while displays such as the goggles and flight gloves of John "MIG Mad Marine" Glenn remind us that these guys all flew for Uncle Sam. The expected assortment of capsules and hardware is capped by a display of Gus Grissom's controversial space suit, isolated in a glass box and ominously lit from below (The Borg influence again). If you take the time to read the exhibit descriptions (and block out the noise) you will turn up esoteric gems, such as the cue cards that Gordo Cooper used for the first live TV broadcast from space; the music cassettes Jack Loosma brought with him during his 56-day stay in Skylab; a replica of the 4.1-billion-year-old "Genesis Rock" (carried back on Apollo 15); and some unappetizing examples of Soviet space food.

Roughly 300 Americans (not counting monkeys) have flown into space. Only 25 percent of them have been considered good enough for the hall of fame part of the United States Astronaut Hall of Fame, which is also the least exciting, quietest, and emptiest part of this attraction. A quick look at the plaques will tell you why: most astronauts, even the best, are no more memorable than really, really good bus drivers. Charles Bolden, Henry Hartsfield, and Brewster Shaw were probably great space shuttle commanders, and Paul White was no doubt a terrific pilot of Skylab 2. But do you remember any of them? Once America left the moon, nobody paid much attention.