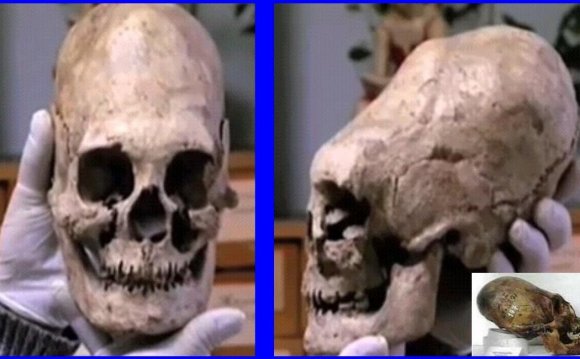 Ancient alien theorists like Erich von Däniken believe that, thousands of years ago, extraterrestrials landed on Earth, where they were hailed as gods and helped shape human civilization. But what proof could possibly exist for such an encounter? Proponents of the theory point to two types of evidence: ancient religious texts and physical specimens such as cave drawings, stone sculptures and pyramids. Is your curiosity piqued? Here’s a quick introduction to some of the most famous examples.

Etched into a high plateau in Peru’s Nazca Desert, a series of ancient designs stretching more than 50 miles has baffled archaeologists for decades. Along with simple lines and geometric shapes, they include drawings of animals, birds and humans, some measuring more than 600 feet across. Because of their colossal size, the figures can only be appreciated from way up in the air—and there is no evidence that the Nazca people, who inhabited the area between 300 B.C. and 800 A.D., invented flying machines. According to ancient alien theorists, the figures were used to guide spaceships as they came in for a landing, and the lines served as runways.

Many Sanskrit epics, which were written in India more than two millennia ago, contain references to mythical flying machines called vimanas. Pointing to similarities between descriptions of vimanas and reports by people who claim to have seen UFOs, ancient alien theorists have suggested that astronauts from other planets visited India during ancient times.

The Moai of Easter Island

The Polynesian island of Easter Island is famous for its “maoi”: the 887 giant human figures with enormous heads that guard its coastline. Roughly 500 years old, these monolithic statues stand 13 feet high and weigh 14 tons, but some are twice as tall and much heavier. How could human beings without sophisticated tools or knowledge of engineering craft and transport such incredible structures? Some ancient alien theorists believe it is the work of visiting extraterrestrials who left their mark on the island.

Located in the Bolivian highlands, Puma Punku is a field of stone ruins scattered with giant, finely carved blocks. Such precise workmanship on a massive scale would have been nearly impossible without modern tools and machines, yet the ruins are more than 1, 000 years old. Ancient alien theorists have hypothesized that extraterrestrials with advanced engineering techniques created the site or advised the people who built it.

The Book of Ezekiel

In the Book of Ezekiel, part of the Hebrew bible, a prophet has a vision of a flying vessel accompanied by fire, smoke and a loud noise. Some ancient alien theorists have argued that the vehicle’s design closely mirrors that of a modern spaceship. Rather than a divine intervention, then, perhaps the text describes an early encounter between humans and alien astronauts.