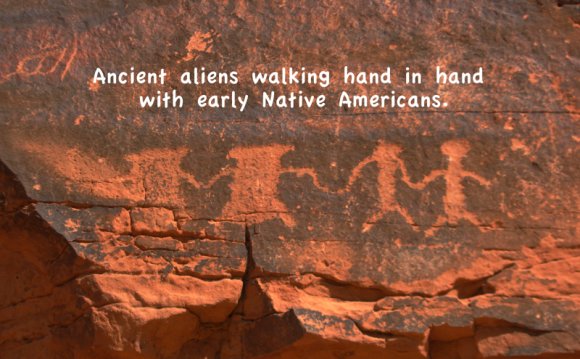 Some say it’s obvious we’re not alone, others scorn the very idea and still others yet will hauntingly report their own experiences of alien probings following their casual night-time stroll through the fields of small town America. But with everything from increasingly bizarre reportings from increasingly credible sources, to basic mathematical probability suggesting the likelihood of alien life, these days, scepticism is harder won. Whatever your opinions, you may well find that the following examples have some impact on them.

It’s easy enough to write off much recent phenomena, quoting anything from wayward weather balloons to the perpetuation of the legend and UFO sightings in pop culture providing a cohesive image of extra terrestrials for eye witnesses to draw on should someone cry alien. But what’s slightly harder to dismiss is the ancient evidence (i.e. pre the National Enquirer). Enter the ‘The Madonna with Saint Giovannino’, otherwise known as the UFO painting.

Created in the 15th century, it depicts the Virgin Mary and in the backdrop of the painting, a man and his dog staring up at a hovering disk-like object that is suspiciously familiar. And this painting isn’t alone either, with everything from ancient cave paintings to Sanskrit Scrolls all depicting alien life. A sighting even crops up in the Bible in The Book of Ezekiel. Either this is compelling evidence, or humanity has a rich tradition of conspiracy theorists.

In the ancient city of Paracas, Peru, archeologists have uncovered mummified remains with elongated skulls dating back to 300 BC.

Back in 1961, astronomer Frank Drake devised an equation by which he could estimate the likelihood of the existence of alien life, taking into account a number of factors including the average number of planets able to support life and the fraction that could go on to support intelligent life. This was then implemented in 2001. The result: statistically, hundreds of thousands of such planets should technically exist.

There are more registered sightings of UFOs than there is the word count here to deal with them and the majority of the time, there’s a thorough debunking accompanying them. But throughout history there have been a number that have been harder to explain away, from the to 1853 sighting by a number of students and professors at the Tennessee College campus, to the oft quoted Stephenville Lights case from 2008, with over 200 witnesses spotting the UFO including three policemen who remained anonymous. Consider these compelling cases unsolved.

If you’re going to believe any reports of UFOs, you might as well trust those coming from the men who have actually been to space (who usually also come with all their teeth and a P.H.D.). The list of those who have made claims of sightings includes Edgar Mitchell, Cady Coleman and Dr. Brian O’Leary, many also referencing government knowledge of alien existence and cover-ups. Buzz Aldrin has also spoken of his own experience on board the Apollo 11 when they saw something flying alongside them. At first they thought it was the final stage of the detached rocket, until mission control confirmed it was 6000 miles away from them…

While some US presidents have released classified files on the subject of UFOs, with Jimmy Carter famously describing his own encounter, others still have been denied access to classified information on the subject altogether, Bill Clinton claiming to be among them. This has led many believers to suggest there’s a cover up afoot. Clinton has been consistently vocal on the existence of aliens and it’s worth noting his opinions on an ‘Independence Day’ situation too. You know, just in case…

Ancient Astronauts The Return of the Gods Part 2 NEW ...

Ancient Astronauts The Return of the Gods Part 4 - NEW ...