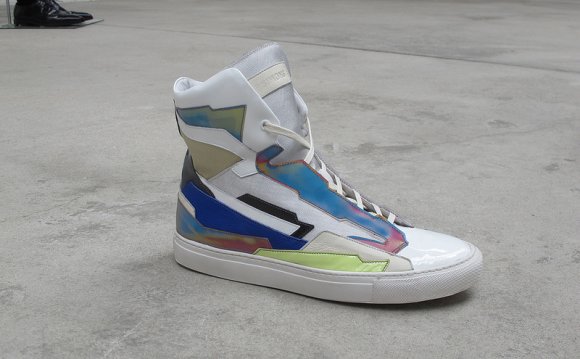 Fashion designer Raf Simons has unveiled his latest footwear collection for Adidas for which he incorporated colors, fabrics and add-ons inspired by retro astronaut apparel.

The 2015 Autumn/Winter line of sneakers stomped down the runway in Paris this week, and will hit stores in mid-July. No word yet on whether the prices will be astronomical.

It's been a while since Moon Boots took the 80s fashion world by storm, but what with the recent success of films such as Gravity and Interstellar, it seems pop culture's fixation with outer space has finally made a footwear reappearance once again.

But will they take off? Fashion designer Raf Simons has unveiled his latest footwear collection for Adidas for which he used colors, fabrics and add-ons inspired by retro astronaut apparel (pictured)

One giant leap for footwear: The sneakers feature blue and red fixtures which mimic those found on NASA spacesuits like the one worn by Neil Armstrong, the first man to walk on the moon (pictured)

Stellar: Moon Boots gained popularity in the 80s and continue to retail today for around $100

'Inspired by vintage astronaut suits and backpacks, molded and machined details similar to authentic closures, zippers and straps are added, ' said a statement from Adidas.

It's too early to tell whether the astronaut-inspired sneakers will take off with fashion fans, but it seems unlikely they'll enjoy a run as long as their Moon Boot predecessors.

First created in the early 70s by an Italian company called Technica Group, Moon Boots gained widespread popularity during the 80s and remain in production to this day.

Closely resembling the gear worn by real astronauts, a pair of classic Moon Boots currently retail for around $100.

The Mercury 7 Astronauts and Celestis