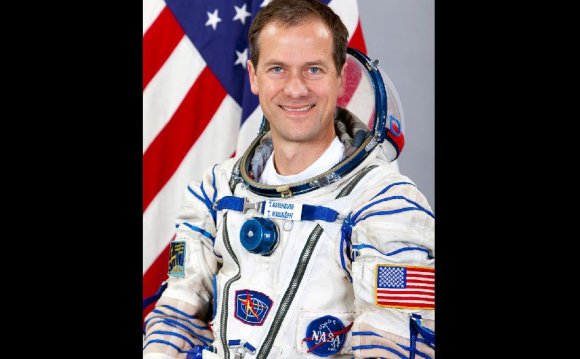 Hadfield captured this twist of clouds near Arica, in the northern edge of Chile. He explains: "You see these frequently in this part of the world because the Pacific is cold, the land is warm, and the currents and winds combine to form a cloudy vortex — clockwise here, because it's the southern hemisphere. North of the equator, the spiral would turn counter-clockwise." CREDIT: Chris Hadfield/NASA

Hadfield saw a wolf's head in the evaporation ponds in Utah's Great Salt Lake. "The largest saline lake in the western hemisphere attracts pastel-colored algae, brine shrimp and the birds that love them, but so far, just this one lone wolf, " he writes. CREDIT: Chris Hadfield/NASA

The Richat Structure in Mauritania, sometimes called the "Eye of the Sahara, " will instantly orient your gaze if you're lost above the 3.6 million-square-mile desert, according to Hadfield. "Oddly, it appears not to be the scar of a meteorite but a deeply eroded dome, with a rainbow-inspired color scheme, " Hadfield writes. CREDIT: Chris Hadfield/NASA

Coffee and sugar plantations once lined the Rio Tietê in Brazil, but many of the farms were submerged after the river was dammed in the 1990s to create a hydroelectric power plant. Here, some might just see flooding. Hadfield sees a giant millipede crawling on the face of the planet. CREDIT: Chris Hadfield/NASA

Alien Face Found On Moon In NASA Photo With Astronaut ...

Did NASA astronaut Scott Kelly tweet a photo of a UFO?

A NASA astronaut just took this photo from the ...