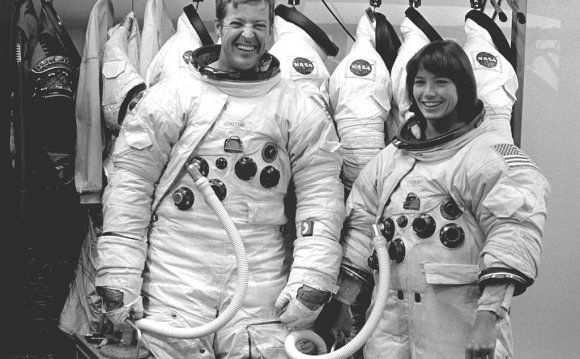 A video of Anna Lee Fisher in 1981 talking about why she wants to go to space.

Anna Lee Tingle Fisher (née Sims) (born August 24, 1949) is an American chemist, emergency physician, and a NASA astronaut. Formerly married to fellow astronaut Bill Fisher, and the mother of two children, in 1984 she became the first mother in space. Fisher is the oldest active American astronaut. During her career at NASA, she has been involved with three major programs: the Space Shuttle, the International Space Station and the Orion project.

Although Fisher was born in New York City, she grew up in San Pedro, California, and considers it her hometown. She is a 1967 graduate of San Pedro High School. She went on to receive a bachelor of science in Chemistry in 1971 at the University of California, Los Angeles (UCLA). Fisher then stayed on at UCLA and started graduate school in chemistry in the field of x-ray crystallographic studies of metallocarbonanes. The following year she moved to the UCLA medical school and received her doctor of Medicine degree in 1976. She did an internship at Harbor General Hospital in Torrance, California, in 1977. She chose to specialize in emergency medicine and worked in several hospitals in the Los Angeles area. Fisher later went back to graduate school in chemistry and received a master of science in chemistry from UCLA in 1987.

Fisher was selected as an astronaut candidate in January 1978. In August 1979, she completed her training and evaluation period, making her eligible for assignment as a mission specialist on space shuttle flight crews.

For STS-5 through STS-7, Fisher supported vehicle integrated testing and payload testing at Kennedy Space Center. In addition, Fisher supported each Orbital Flight Test (STS 1-4) launch and landing (at either a prime or backup site) as a physician in the rescue helicopters, and provided both medical and operational inputs to the development of rescue procedures. Fisher was a CAPCOM for STS-9.

She would eventually fly in late 1984 on STS-51-A aboard . The mission deployed two satellites, and recovered two others whose PAM kick motors failed to ignite.

Fisher was assigned as a mission specialist on STS-61-H prior to the Space Shuttle Challenger disaster. Following the accident she worked as the Deputy of the Mission Development Branch of the Astronaut Office, and as the astronaut office representative for Flight Data File issues. In that capacity she served as the crew representative on the Crew Procedures Change Board. Fisher served on the Astronaut Selection Board for the 1987 class of astronauts. Fisher also served in the Space Station Support Office where she worked part-time in the Space Station Operations Branch. She was the crew representative supporting space station development in the areas of training, operations concepts, and the health maintenance facility.