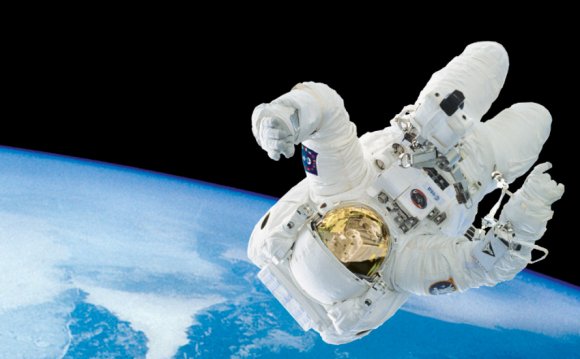 Scott Kelly grabbed a microphone and dove head-first down a corridor of the International Space Station as Boston students watched on a screen many miles away.

Kelly is one of two Americans currently onboard the space station, which is positioned 250 miles above the earth’s surface.

He would spent the next 20 minutes somersaulting and Skyping with students from seven Boston-area schools who had gathered at the Museum of Science to hear him speak about life as a NASA astronaut.

One student asked Kelly if he ever got homesick. In October, he broke the U.S. record for longest space flight after spending 216 days aboard the space station. He isn’t due to come back to earth until March 2016, as part of a year-long mission.

“I wouldn’t call it homesick, ” he said. “I’ve been up here, well, I don’t even know how long, but it’s a great opportunity. I do miss human contact and some things about being on earth. Also, just being able to go outside and experience nature.”

“Talking with Kelly, and explaining how astronauts are still contributing to the larger field of science, shows students that there’s still room for them to join the program, ” he said.

Despite being trapped in a space station the size of a football field, Kelly does get to experience nature from a different point of view. He told students the space station circles the globe every 90 minutes, which means he sees 15 sunrises and sunsets a day.

Kelly often tweets out photos of the sunrises, and showed students the long lens camera he uses to capture them.

Alex Salamanca, a student at Fenway High School, is an aspiring computer scientist who hopes to study at MIT. She isn’t sure whether she’d like to become an astronaut, so she asked Kelly if astronauts need to be engineers, or if it’s possible for them to have a background in coding and programming.

“Most astronauts up here have a technical background, ” he said. “Many of them are engineers, though that doesn’t have to be the case.”

Other students were more interested in daily life aboard the space station, and asked how astronauts shower. Kelly laughed, then grabbed a paper towel.

“We wet this with some water and that’s pretty much it, ” he said as he mimicked rubbing the paper towel on his bald head. “You’re looking at it.”

“How do you go to the bathroom?” another student asked.

“The microgravity environment looks fun, ” Kelly said, then performed a somersault in midair. “And it is, but it makes things more difficult. It’s tricky.”

NASA only allotted 20 minutes for the call, O’Dea said, since every minute of the astronauts’ time is regimented. But the commanders on the ground gave students five extra minutes so they could finish their questions.

The last student asked Kelly, “Do you believe there’s life outside of our solar system?”

“I do, ” he said. “They say there’s more stars than grains of sand on all of the beaches. Up here, we fly over beaches and deserts dozens of times a day, and I just have to believe that somewhere amongst all those stars there’s life out there.”

Kelly knew that not every student in the auditorium was interested in becoming an astronaut, so he offered some more general career advice to the students.