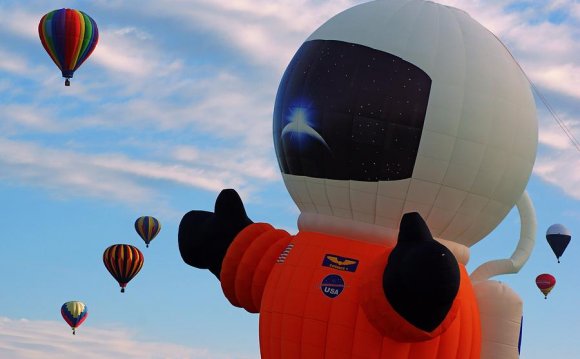 The ISS orbits the Earth at 330 kilometers or 205 miles above sea level. At this altitude, it is well above all but the rarest parts of the atmosphere, and far above the height any balloon has ever reached.


" by Kelvinsong - Own work. Licensed under Creative Commons Attribution-Share Alike 3.0

The other challenge is that to achieve orbit, things have to move very fast. The ISS is moving at nearly 8 kilometers per second or over 17, 000 miles per hour. This is over six times faster than a bullet leaving the muzzle of a high-velocity rifle!

Bullets are slow compared to the ISS! by Njn licensed under

If a balloon could get as high as the International Space Station and tried to dock, the two would collide in something like an explosion. It would be a much greater difference in speed than a bug hitting a race car windshield.