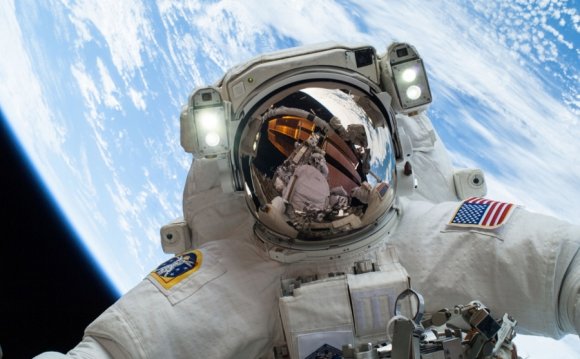 Spacewalking
What does EVA stand for?
EVA is a commonly used acronym for Extravehicular Activity, which describes any activity for which a crewmember must go outside the protected "shirtsleeve" environment of the orbiter's crew cabin.

How long does oxygen last in the spacesuit?
The space suit, called the Extravehicular Mobility Unit or EMU, uses 100 percent oxygen instead of air. When a crewmember does a spacewalk, the suit is pressurized to about 1/3 of atmospheric pressure. The amount of oxygen contained in air at this pressure is not adequate, thus requiring the use of pure oxygen. Each EMU has two oxygen tanks (similar to scuba diving tanks) that work with a carbon dioxide removal system to allow a 6 to 8.5 hour spacewalk. Without the ability to remove carbon dioxide, the oxygen in the tanks would run out more quickly, because much would be tied up in exhaled gas. The amount of oxygen consumed, and carbon dioxide produced by a crewmember is dependent on his/her metabolic rate. The life support system holds other things that get consumed during a spacewalk as well. These include a battery and cooling water. These too allow a 6 to 8.5 hour spacewalk.

If astronauts get hungry or thirsty during a spacewalk, can they have a snack?
The EMU (Extravehicular Mobility Unit) has a drink bag which velcros to the front interior of the suit. The bag comes in two different sizes 21 oz and 32 oz and it is crew choice as to which bag they fly. The bag has a drink tube with a valve which prevents free flow of water into the suit. The valve is opened when the crew sucks on the tube for water. Their food was provided by a fruit bar wrapped in an edible rice paper. The stick was stowed in a sleeve which is mounted to the neck area of the EMU. To eat, the crew bent their neck down and take a bite of the bar and slide it up, which set it up for their next bite. This food bar is no longer flown, as most of the astronauts preferred to eat prior to their spacewalk.

Why do the space suits have to be so bulky and hard to work in? Why not develop a slimmer, more ergonomic suit?
The primary requirement that any spacesuit must meet is to provide a pressurized volume for its crewmember. Lots of spacesuit improvements have been investigated and implemented over the years, but many of the more obvious shortcomings are probably here to stay. While the existing design is indeed bulky, it is a reliable, proven design that accommodates a wide range of sizes of EVA crew. There have been lots of new designs investigated, but all of them are equally bulky. It is simply not possible to decrease the bulk and provide improved flexibility without REALLY increasing the cost of each suit. Improvements such as better gloves, thermal comfort enhancements, and better helmet lights continue to be implemented as they are developed and made available.

How is the airlock vented?
The shuttle's airlock is vented directly overboard to space. We do not save the gas for reuse because the hardware (pumps, valves, etc...) would weigh significantly more than just loading the extra nitrogen and oxygen each mission. For the International Space Station however, nitrogen and oxygen are a valuable consummable and we want to vent as little as possible overboard. The station airlock will have pump that will depressurize the airlock from 14.7 psia down to 1 or 2 psia. This gas will be pumped back into the main volume of the station, and the remaining gas in the airlock will be vented overboard.

During a spacewalk, how do you keep your tools from floating away?
Since there's no gravity up here we have to be very careful with our tools, and we basically have what we call a 'tether protocol' up here. Every single thing that we grab onto once we're outside the cockpit, we're actually tethered to with these tethers and the hooks that are on the ends of these tethers actually require two separate actions to open. In that way we don't accidentally open one of the hooks and therefore lose one of our tools. (Answered by STS-82 crewmember and spacewalker Steve Smith.)

Astronaut in EVA captured from the Ground