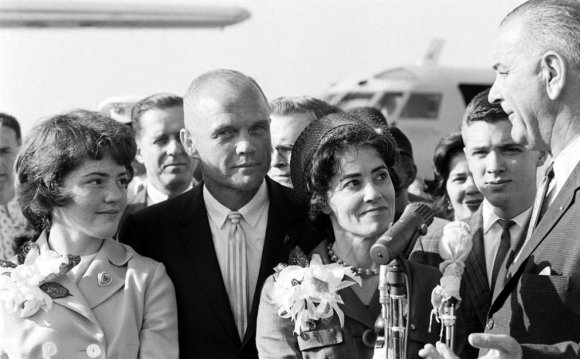 NASA astronaut Bruce McCandless floats against a backdrop of blue seas and white clouds in an April 1983 photograph taken during a flight of the space shuttle Challenger. Equipped with a handheld controller for a maneuvering thruster, McCandless made the first spacewalk without being tethered to a shuttle.

Overall, the shuttle missions required a complete rethink of the space suit, ILC Dover's Ayrey said. "All suits have to be a little different. You don't take a Volkswagen off-the-road racing, " he said. "You have to have that special vehicle. It's the same with space suits."

The Apollo space suits were designed to work in low-gravity environments and, as a result, they had flexible torsos, ankles, and knees for full-body mobility. This was less of an issue for the space shuttle suits, which were designed for zero-g work that requires mobility in only the upper body, for the most part.

The shuttle suits were also the first to be built with a modular design philosophy, Ayrey said. "We build [different parts of the suit] and ship them out to Houston, where the suit can be assembled for a mission and then brought back and disassembled and reused over and over again."