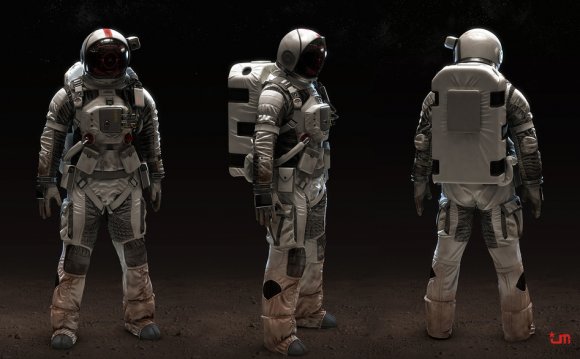 Being developed for missions in 2015 and beyond, the Z-1 improves mobility for walks on the moon and Mars.

NASA is designing the prototype Z-1 spacesuit for a range of possible missions after 2015. The Z-1 offers enhanced mobility for space walks on the moon and Mars.

A major innovation in the Z-1 is its rear-entry hatch. Instead of being worn like clothing, the Z-1 is entered as if it were a spacecraft, through its back hatch.

Through a back-mounted suit-port plate, the suit can be docked to an external hatch on a rover or space vehicle. The suit port arrangement allows astronauts to slide directly into a spacesuit from within a vehicle. An inner hatch cover and portable life support system (PLSS) are removed for access to the suit.

Earlier NASA suits were split into separate pants and torso sections. The Russian Orlan suit used since 1977 has a rear hatch for entry, similar to the Z-1 design.

Another innovation in the Z-1 is its life-support system. Carbon dioxide will be continuously removed from breathing air, ending the need for canisters of CO2-absorbing lithium hydroxide.

The current NASA suit, the Extravehicular Mobility Unit (EMU), was designed in the early 1980s but was upgraded in 1998 for the task of building the International Space Station. The upgraded EMU is modular so that parts can be swapped to fit different astronauts. The suit parts can be left aboard the station for up to two years.

A Light Before Dawn (The Astronaut Suit)