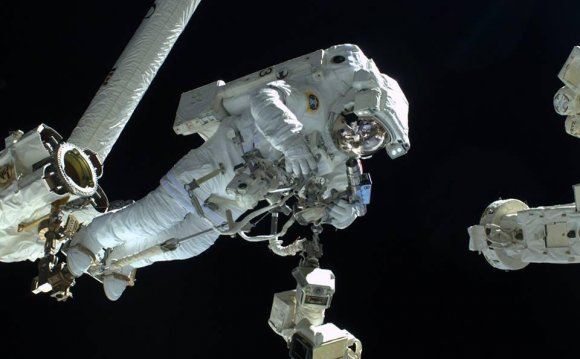 What is an astronaut's favorite place on a computer?
The space bar.

Where would an astronaut park his space ship?
A parking meteor!

What time do astronauts eat?
At launch time.

What was the first animal in space?
The cow that jumped over the moon.

What did the alien say to the cat?
Take me to your litter.

Why did the astronaut retire?
He got spaced out!

What is an astronauts favorite chocolate?
A marsbar!

How do you know when NASA astronaut Lisa Nowak is pissed?
Just see if she's wearing diapers!

What do you call a tick on the moon?
A luna-tick

Why are there no female astronauts on the moon?
Because it doesn't need cleaning yet.

What do you call a donkey throwing nuts to the moon?
An ass throw nut (astronaut).

How do you know when the moon has enough to eat?
When it's full.

How do you get a baby astronaut to sleep?
You rocket

How do astronauts eat their ice creams?
In floats!

Why don't people like the restaurant on the moon?
Because there was no atmosphere.

What do Astronauts eat on?
Flying Saucers!

How did NASA astronaut Lisa Nowak feel after driving 900 miles in a diaper?
Like one of Britney Spears kids!

Why did the cow go in the spaceship?
It wanted to go to the mooooooon!

Why did the baby go to outer space?
To visit the milky way.

What does an astronaut use to keep his feet warm?
A space heater.

Where do astronauts grab a drink?
At the spacebar!

What do you call a space explorer that talks smack?
A sass-tronaut!

Why did the cow jump over the moon?
Because the farmer had cold hands!

How do you know when the moon is going broke?
When it's down to its last quarter.

How does one astronaut on the moon tell another astronaut that he is sorry?
He Apollo-gises.

If athletes get athlete's foot, do astronauts get mistletoe?

I'd tell you a joke about space, but... its too, out of this world!

Hi, im an Astronaut and my next mission is to go to URANUS

Two Blondes
Two blondes in Las Vegas were sitting on a bench talking at night ... and one blonde says to the other, "Which do you think is farther away ... Florida or the moon?"
The other blonde turns and says "Hellooooooo, can you see Florida?"

Drinks
Two gay men were having drinks together and talking about the space program, when one asked, "Do you think man will ever land on Mars?"
"Why not?" said the other."Man is already landing on Uranus."

Rocket To Space
There was a man who wanted a rocket to go to space.
He told his wife and she said ok.
The next day he went downstairs and the TV was gone his wife came in the room and said what you said you wanted some space.