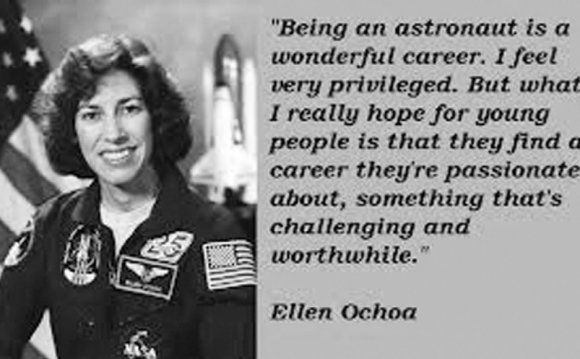 Students on Scholastic.com interviewed astronaut Ellen Ochoa during 1999's Hispanic Heritage Month. Below is a transcript of that interview.

What are your Hispanic roots? Did you speak Spanish at home when you were growing up?
My Hispanic roots come from my father's side. His parents were Mexican, but my father was born in this country. He was one of 12 children. My father grew up speaking both Spanish and English but unfortunately he didn't speak Spanish with us at home. When I was growing up, my father believed as many people did at the time that there was a prejudice against people speaking their native language. It's really too bad, and I'm glad that things have changed in recent years.

Does your being Hispanic American make you feel more pressure and more pride about your accomplishments? Do you have that in mind when you think of how well you've done in life?
I don't believe that being Hispanic American puts any additional pressure on me. I seem to put enough pressure on myself as it is. As for my accomplishments, being an astronaut has given me the opportunity to speak to children all over, including children with the same background as myself. I think that it's important for children to have a role model to see what they can grow up to be. It's important they know that if they work hard, they can be and accomplish whatever they want. I am proud to be an example of that.

Who do you think was the most influential person in your life?
My mother influenced me the most. When I was a year old, she started college. She had to raise five children primarily on her own and so she couldn't take more than one class each semester. She didn't graduate until 22 years later, but she did finish. Her primary focus was the enjoyment of learning. That's what I got from her example.

What were you interested in when you were in fifth grade?
When I was in the fifth grade, I think I wanted to be president. I got over that by the time I was in the sixth grade. I didn't think that I would be an astronaut. But you never know how your interests will change. That's why it's important never to shut down your options. In college, I changed my major five times. I started college interested in music and business, and graduated with a degree in physics. I didn't actually pursue becoming an astronaut until graduate school when I learned about the kinds of skills NASA was looking for in potential astronauts.

What is it like to operate a robot arm in space?
I have worked the robot arm on all three of my space missions, and I really love it. It's challenging to do, but lots of fun. On my last mission to the space station I worked with the help of cameras and monitors because we were docked in a way that prevented me from seeing the robot arm. This made things more difficult, but then again, everything I've done on actual missions in space has always been easier than when I first tried it during training.

What is NASA training like?
Everything is always harder to do in training. In training, we prepare for anything that could happen on a space mission - anything that could go wrong. In training things keep breaking, problems have to be solved. Nothing has ever gone wrong on any of my missions, and our training helps us make sure that nothing will. Each mission has its own specific. For my last mission, we trained for nine months before the actual flight. I started my formal NASA training in 1990. During that period I spent about half of the time in training, the other half I spent performing other duties. I was in training for three years before my first mission, which isn't that long of a wait. Some astronauts have waited 10, even 16 years before they finally go into space!
What is it like to float in zero gravity?
Weightlessness is the fun part of the mission. There is really nothing to compare it to on Earth. I guess the closest thing would be swimming or scuba diving. It's a similar freedom of movement. What is odd is that weightlessness seems more natural. You don't have the same kinds of sensations in space as you do in the water.

How do you sleep on the space shuttle? Does everyone sleep at the same time or do you take turns? Do you have weird dreams because you're sleeping in space?
On my first two missions we slept in two shifts. We had sleeping compartments that looked like coffins. On my last mission we slept in a single shift. Instead of the sleeping compartments we slept in what can best be described as a sleeping bag with hooks. You would find a place to hook on to, and float in. As for my dreaming, it isn't that different in space. I tend to dream a lot, whether I'm in space or at home on Earth. I have floating dreams on Earth and non-floating dreams on a mission in space.

What does Earth look like from space?
That's a really hard question. You have to remember that the shuttle is moving at five miles a second, so the Earth looks very different depending on where you are in space in relation to the position above Earth and what time of day it is. I have to say though, Earth looks very much like I expected it to look. The Imax films are pretty close to what Earth really looks like from space. The main difference is that the colors are much more vivid when you're in space.