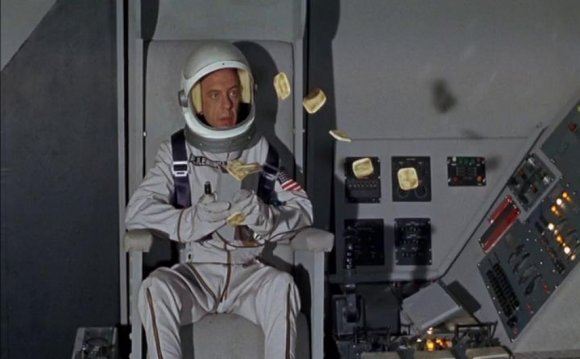 The Reluctant Astronaut (1967) is a Universal Pictures feature film produced and directed by Edward Montagne and starring Don Knotts in a story about a kiddie-ride operator who is hired as a janitor at the Manned Spacecraft Center in Houston and is eventually sent into space.

Comedian Knotts had won several Emmy Awards as small-town comic sheriff's deputy Barney Fife in the 1960-1968 television sitcom but left the show as a regular at the end of its fifth season (1964–1965) to pursue a career in feature films with Universal Pictures. The Reluctant Astronaut followed Knotts' first Universal film venture, (1966). Actor Paul Hartman appears in the film and would later star in . The film's screenplay writers Jim Fritzell and Everett Greenbaum had served as teleplay writers for the television series.

Roy Fleming (Don Knotts) is fairground operator of a kiddie-spaceship ride in Sweetwater, Missouri. Despite being 35 years old, he still lives with his parents and suffers from extreme acrophobia (fear of heights). His father Arbuckle (Arthur O'Connell) wants better things for his son, so he sends an application to NASA. Roy later learns from his mother (Jeanette Nolan) that NASA has accepted him as a "WB-1074".

When Roy arrives at the Manned Spacecraft Center in Houston, supervisor Donelli (Jesse White) places him in training as a janitor. Roy accepts the disappointment and unsuccessfully tries to explain things to his family back home, who believe that he is an astronaut. Meanwhile, he is befriended by veteran astronaut Major Fred Gifford (Leslie Nielsen). One day, Roy is alarmed to discover that his father and his friends, Plank (Frank McGrath) and Rush (Paul Hartman) are paying him a surprise visit at work. Anxious to please his domineering father, he dons a space suit and pretends to be an astronaut. Arbuckle, a World War I veteran, tells his friends, "he is proud Roy is now serving his nation." After wreaking general havoc on the simulators and other hardware, Roy is exposed as a janitor by Donelli and summarily fired in the presence of his father.

When the Russians plan to trump NASA by sending a dentist into space, NASA moves quickly. Roy is found in a bar, rehired, and selected as the man least likely to venture into space and sent aloft. His father watches on TV, convinced the janitor story was a ploy for security reasons. During some eating experiments, Roy gets peanut butter into the guidance system and is in danger of being marooned in space. He remembers the retro rockets from his role as "Mr. Spaceman" on the amusement park ride and launches them, bringing the capsule safely home. Roy is hailed as a hero, and marries his sweetheart Ellie Jackson (Joan Freeman).

Although the majority of was photographed at Universal Studios, Stage 30, location shooting at Johnson and Kennedy Space Centers, along with stock footage of real spacecraft was spliced into the film. The "Kiddieland" carnival scenes at the beginning of the film were filmed at the Universal Studios Courthouse Square, Backlot, Universal City, California.

If you look carefully at the scenes in which Don Knotts (with the name F. Gifford on it) is wearing a space suit, the US Flag on the shoulder has only 48 Stars. Of course by this time the flag had 50 stars.