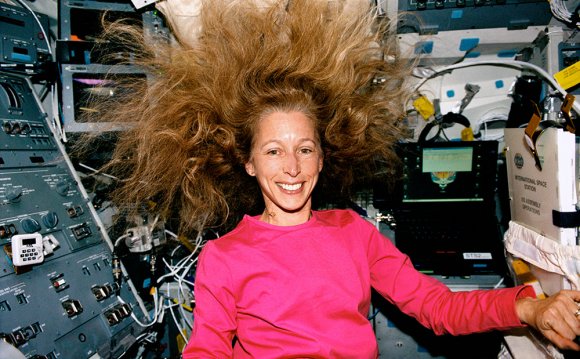 There’s no way to anticipate the emotional impact of leaving your home planet. You look down at Earth and realize: You’re not on it. It’s breathtaking. It’s surreal. It’s a “we’re not in Kansas anymore, Toto” kind of feeling. But I’ve spent a total of 55 days in space, over the course of five missions for NASA, and I’ve learned that being out there isn’t just a series of breathtaking moments. It’s a mix of the transcendently magical and the deeply prosaic. It can be crowded, noisy, and occasionally uncomfortable. Space travel—at least the way we do it today—isn’t glamorous. But you can’t beat the view!

Everyone imagines that when you’re sitting on the launchpad atop 7 million pounds of explosive rocket fuel, you’re nervous and worried; but the truth is, there isn’t much to do for those two hours after you climb into the shuttle. Many astronauts just take a nap. You’re strapped in like a sack of potatoes while the system goes through thousands of prelaunch checks. Occasionally you have to wake up and say “Roger” or “Loud and clear.” But the launch itself is a whole other thing—from the pad to orbit in 8.5 minutes, accelerating the entire time until you reach the orbital velocity of 17, 500 mph. That is a ride.

It turns out that once you’re actually in orbit, zero-g has some upsides. Without gravity, bodily fluids move toward your head. It’s a great face-lift. Your stomach gets flat. You feel long, because you grow an inch or two. (I thought, “Oh cool, I’ll be tall, ” but of course everybody else was taller too.)

But zero-g also has some disadvantages. As that fluid shifts north, you get an enormous headache. Your body compensates and loses about a liter of fluid in the first couple of days—you essentially pee the headache away. And a lot of people get nauseated. The way to feel better is to “lose up, ” to convince your visual system that “up” is wherever you point your head and “down” is where your feet are. When you can do that, and go headfirst or earlobe-first wherever you want, then you’re getting adapted to zero-g. On each flight this adaptation happens more quickly—your body remembers having been in space. But it can take a few days before your stomach finally settles down and says, “OK, what’s for lunch?”

I didn’t eat much on any of my flights. I don’t have a big appetite even on Earth, but between the lack of gravity and the shifting fluids, things can taste different in space. I’d bring great chocolate with me and it would taste like wax—it was very disappointing. But you don’t go to space for the gourmet dining. There’s no way to cook, on the shuttle or on the ISS. Space food is already cooked and then either freeze-dried and vacuum-packed—so you add water and put it in the oven to warm up—or it’s thermo-stabilized, like a military MRE. With no refrigerator on board, fresh food won’t keep. So on the shuttle we’d have to eat anything fresh—usually fruit like apples, oranges, and grapefruit—early in the mission.

The Martian Stars Ask Real Astronauts About Life in Space ...

Tweeting astronaut on life in the Space Station