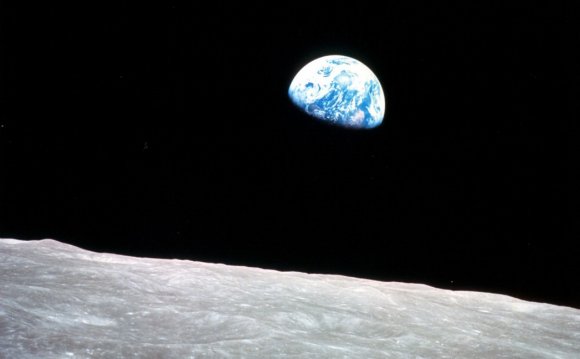 The moon will always cast a long shadow over the Anders family. That has been both a great blessing and the source of some angst. Being an Apollo astronaut is the ultimate American typecasting; so huge was the role that most who played it never really became much of anything else.

Not so with Anders, whose post-space résumé — diplomat, corporate CEO, and so on — would make him captain of just about any Cold Warrior’s dream team. You couldn’t blame him for yearning for a little credit for something other than that little trip through space in his 35th year.

But he is astute enough to understand the nature of fame, an ongoing public fascination with America’s improbable push to the moon and its seeming abandonment of a greater space quest.

This year, immediately in the wake of the death of a close friend, Apollo 11 astronaut Neil Armstrong, Anders did what for him qualifies as a rare thing: sat still long enough to relive his spaceflight and offer a candid take on larger questions of the universe — all from the unique perspective one can get only by looking back at our planet from deep space.

WE MIGHT AS well start with the flight. It was a very big deal. Before Apollo 8 went skyward in December 1968, the farthest away any man had ever gone from Earth was 850 miles, on a Gemini flight.

Interstellar chump change. The Apollo 8 crew (Anders, Frank Borman and Jim Lovell) would travel nearly 240, 000 miles into space. John Glenn’s Earth orbit had been a small step. This was the big leap.

And let’s get real about what pushed us in the first place: “Apollo was all about beating the Russians to the moon, ” says Anders, a nuclear engineer who once headed a critical U.S. commission on the future of post-Apollo spaceflight. “It was not to get rocks. We went to the moon to stick the flag in.”

Not that there’s anything wrong with that. But it’s an important point, because the frantic space race literally defined Apollo 8’s mission in an era when the 1957 flight of the basketball-sized Soviet satellite Sputnik 1 sent Americans to work digging bunkers in their backyards.

The first and only spaceflight of Bill Anders was intended to be an earth-orbit test of NASA’s lunar landing vehicle, paving the way for Apollo 11’s landing. But about six months before its scheduled blastoff, U.S. spies reported that the USSR was poised to launch its own manned flight to orbit the moon. Apollo 8’s launch was hastily moved up, its mission revamped to get there first.

In less than three months, NASA engineers threw together the intricate — and untested — mechanics of the first true moon shot. Anders, Borman and Lovell would be the first humans strapped atop America’s massive new Saturn V rocket.

A Naval Academy graduate who had earned an Air Force commission, Anders had cut his Cold War combat-duty teeth flying F-89 “Scorpion” fighter jets over Iceland in the late 1950s. A routine sortie involved sneaking up on Russian bombers, then flipping the bird to Soviet pilots who didn’t really know what it meant — probably a good thing, given that all parties involved were packing nuclear weapons.

To steal a phrase from “The Right Stuff, ” the envelope, in Anders’ mind, had already been pushed. Flying to the moon? Pencil it in.

He left wife Valerie — still along for the ride today, after 57 years — behind with two messages, one to read if he came back, one if he didn’t.

THE LAUNCH, Anders says, was unexpectedly and shockingly violent. NASA had simulated everything except the cacophony of noise and car-crash physics felt by astronauts atop the 30-story rocket.

“We were being hurled around in that thing, ” he says. “We could not function.”

The ride would smooth out and within 40 minutes Anders was 20, 000 miles away from home, trucking along at 24, 000 mph. For three days, the Earth shrunk away in Apollo 8’s rearview mirror.

Once in orbit, one of Anders’ primary jobs was to photograph the moon’s surface, particularly the back side, which no one had ever seen. (The moon is locked in synchronous orbit with the Earth; we see only its “front” face.) Because of the orientation of the planets during this flight, the back side of the moon when Apollo 8 arrived was not dark, but brilliantly lit by the sun.

For the first two of its 10 orbits, the capsule circled the moon upside down and backward. On the third, a small burn of the engine righted the ship. Coming around the back of the moon, one of the astronauts caught a glimpse out a window of Earth — a tiny, magnificent, delicate blue ball — appearing to rise above the forbidding lunar surface.

Anders grabbed his Hasselblad camera, snapped on the longest lens and began firing pictures through a small window.

While he had been meticulously trained to photograph the moon, making pretty pictures of the Earth from space had not occurred to anyone at NASA. So Anders, with no light meter and really no idea where to start, improvised.

Weeks later, a NASA film technician exposed Anders’ frames. One of about 10 fired in that sequence stood out.

That photograph, labeled “Earthrise” on a famed U.S. postage stamp, would become one of the most-oft-published images of all time. (It also has been, Anders recently learned, printed backward for more than 40 years because of a NASA mistake.)

To this day, Anders calls “Earthrise” a “crappy photo, ” saying it’s slightly off-focus. He is being modest. There is no denying the power of the image.

The photo showed Earthlings, for the first time, just how fragile — and beautiful — their planet appeared from afar. It became the symbol of the first Earth Day in 1970 and is given credit for helping propel the environmental movement itself — something Anders embraces.

“I’ve always used the phrase, ‘ironic, ’ ” Anders says. “We came all this way to discover the moon. And what we really did discover is Earth.”