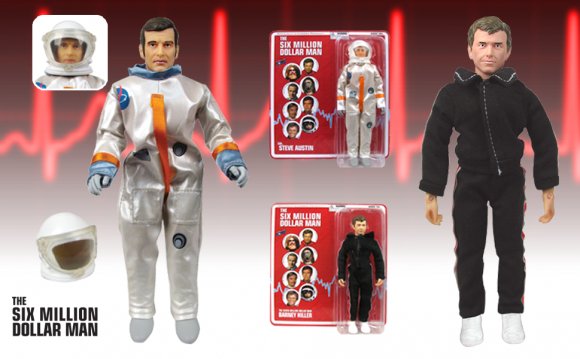 Colonel Steven 'Steve' Austin is the primary protagonist of Martin Caidin's series of novels and the television series spinoff of these books. After a near fatal military plane crash, Steve Austin became the world's first bionic man.

Steve Austin was born February 5, 1942. His father, Carl, was a captain in the US Army Air Force, commanding a DC-3 nicknamed My Little Girl. While on a top-secret courier mission over the Himalayas, his plane was attacked by Japanese fighters. It was reported that Carl Austin bailed out of the plane and left the crew to die (Steve eventually learned it was his co-pilot, Christopher Bell, who fled the plane, "The Coward"). Steve’s mother, Helen, later married Jim Elgin, who brought the family to a ranch in Ojai, California and formally adopted Steve as his son.

Steve excelled at athletics, but also possessed a strong scientific streak. Fascinated by airplanes and flying, he cajoled his parents into letting him get a pilot's license before he could drive a car. He joined Army ROTC in high school to earn money for college and fell in love with local girl Jaime Sommers, but their relationship ended when Steve left for college. While at college, he roomed with future recording star John Perry, and even wrote some songs he claimed would make John famous if he recorded them. In college he was outstanding in football, but turned down offers to join the pros in favor of graduate school. Steve earned masters degrees in aeronautical engineering, geology and history, and occupied what little spare time was left him with programs in wrestling, judo, aikido, gymnastics, and fencing.

Steve's experience as a military pilot dates back to at least October 1962, as he flew reconnaissance missions over Cuba during the Cuban Missile Crisis ("Target in the Sky").

After college, Steve spent a year in Vietnam flying a helicopter gunship, but was shot down (breaking three of his ribs) and sent back to the U.S. to recuperate. He took the opportunity to transfer to the Air Force to fly jets. He commanded a wing of F-111 fighter-bombers, then was assigned to Edwards Air Force Base in California, where he became one of their top test pilots. He also met Doctor Rudy Wells, who quickly became one of Steve's closest friends.

The reputation Steve earned at Edwards made him very attractive to NASA, who recruited him for the astronaut program. Even among the competitors of the astronaut corps, Steve stood out as the youngest astronaut, along with a combination of sheer genius, athletic ability and ladies'-man magnetism. It was at this time that he became seriously involved with Barbara Marsh; he and Barbara were engaged for a time, but his commitment to NASA ended the relationship.

Steve was selected as backup mission commander on Apollo 17, the final lunar landing. When the primary mission commander broke his arm in a car accident two weeks before the launch, Steve was promoted to commander of the prime crew. At 12:53 a.m. on December 7, 1972, Apollo 17 launched from Cape Kennedy, Florida. Four days later, Steve landed his lunar module on the Moon; he carried out a series of successful experiments and even set the record for longest single moonwalk at seven hours, thirty-seven minutes. When Apollo 17 returned from the Moon on December 17, 1972, Steve Austin was a celebrity, as evidenced by a road sign near Ojai featuring his name. (Note: the second telefilm pilot, identifies Austin's ship as Apollo 19.)

After making the obligatory rounds of talk shows and special appearances, Steve returned to Edwards AFB. He was anxious to return to space, but the next round of missions aboard the Skylab space station were already spoken for. NASA wanted him for a rotation aboard Skylab II, but Steve set his sights on the Space Shuttle, and quickly became chief design officer and chief test pilot of a lifting body prototype designed to test a spacecraft's ability to reenter atmosphere and land like an airplane.

The test flight began well. The lifting body detached from its carrier B-52, ignited its engines and brought Steve Austin to the edge of space. He piloted the ship back into the atmosphere and to the runway back at Edwards, but a crucial component of the craft's steering system blew out, and the ship crashed to the desert floor.