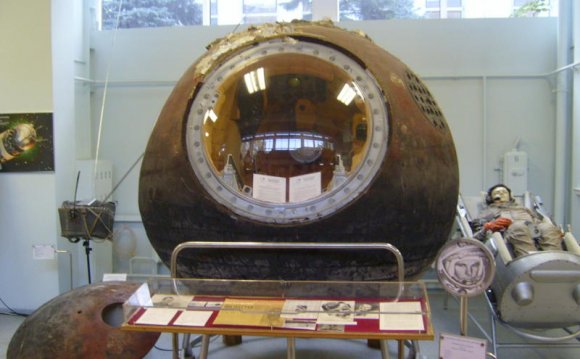 Mankind’s road to the stars had its unsung heroes. One of them was the Soviet cosmonaut Vladimir Komarov. His spaceflight on Soyuz 1 made him the first Soviet cosmonaut to fly into outer space more than once, and he became the first human to die on a space mission—he was killed when the Soyuz 1 space capsule crashed after re-entry on April 24, 1967 due to a parachute failure. However, because he died when the capsule crashed into ground, he is not considered the first human fatality in outer space. The above photograph shows the charred remains of Komarov being looked over by Soviet officials during his open casket funeral. Only a chipped heel bone survived the crash.

All this foretold tragedy started with the 50th anniversary of the founding of the Soviet Union, and the government demanded something big from the space program. Leonid Brezhnev, leader of the Soviet Union, decided to stage a spectacular midspace rendezvous between two Soviet spaceships. The plan was for two Soviet Space vehicles to launch into space and perform a dramatic orbital docking that would allow cosmonauts to move between ships. The first capsule to be launched would be the Soyuz 1, with Komarov inside. The next day, a second vehicle (Soyuz 2) would take off, with two additional cosmonauts; the two vehicles would meet, dock, Komarov would crawl from one vehicle to the other, exchanging places with a colleague, and come home in the second ship. Brezhnev made it very clear he wanted this to happen.

Komarov was selected to command the Soyuz 1, in 1967, with Yuri Gagarin as his backup cosmonaut. Both knew the space capsule was not safe to fly, but everyone in space program was terrified of Brezhnev’s reaction to the mission being delayed or scrubbed. Komarov told friends he knew he would probably die. But he wouldn’t back out because he didn’t want Gagarin to die. Vladimir Komarov was among Gagarin’s best friends. Their families often got together, and on rare times when both men were free, they would go hunting together. They were best friends who were also part of a very small fraternity of men who had stared down death itself in order to travel to space.