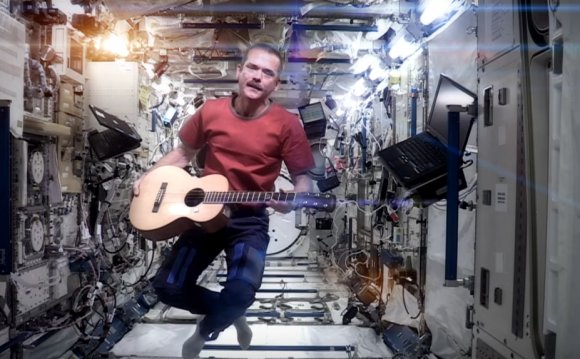 We've known for a while that Hadfield is a big Bowie fan. During one of his stays on the International Space Station (ISS) in 2013, Hadfield recorded his own cover of Bowie's song "Space Oddity."

The lyrics in the song — "For here / Am I sitting in a tin can / Far above the world / Planet Earth is blue" — are a pretty good description of what it's like to float 250 miles above Earth on the ISS.

Several of Bowie's songs are space-themed, but "Space Oddity, " released in 1969, isn't related to a specific moment in space exploration. It's actually inspired by the 1968 science-fiction film "2001: A Space Odyssey, " as Bowie explained 2003 interview with the magazine Performing Songwriter:

In England, it was always presumed that it was written about the space landing, because it kind of came to prominence around the same time. But it actually wasn't. It was written because of going to see the film 2001, which I found amazing. I was out of my gourd anyway, I was very stoned when I went to see it, several times, and it was really a revelation to me. It got the song flowing.

You can watch Hadfield's cover below. The description under the video now reads "Rest in peace, Starman, " a reference to another Bowie song

Tribute to a Starman: David Bowie Mourned by Astronauts ...