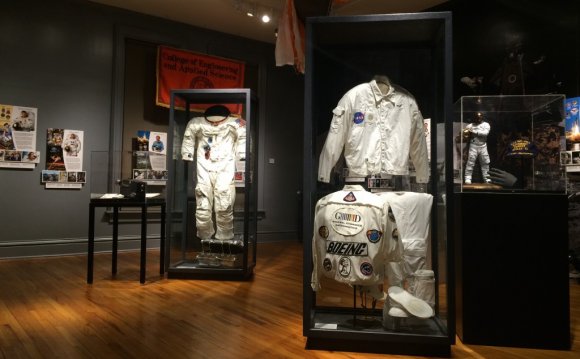 Born in Boulder on May 1, 1925. Bachelor of science in aeronautical engineering from CU, 1949. Flew the second American manned orbital flight on May 24, 1962.

Received a doctorate of philosophy in aerospace engineering from CU in 1988. A member of the crews on STS-87 Columbia in 1997 and STS-107 Columbia in 2003. Space Shuttle Columbia and the crew perished during entry on Feb. 1, 2003.

Received a master of science degree in aerospace engineering from CU in 1969. Mission specialist on STS 51-L, the Orbiter Challenger in 1986, which exploded 1 minute, 13 seconds after launch.

Born in Denver on Aug. 30, 1931. Received a bachelor of science degree from CU in 1953. Was a member of the astronaut support crew for Apollo 7, and replaced prime crewman Thomas K. Mattingly as command module pilot for Apollo 13.

Conducted research on microgravity fluid dynamics at CU from 1987 to 1988. Was a member of the Columbia crew in 1997 and the Endeavour crew in 2008. Logged over 754 hours in space.

Received a doctor of philosophy degree in astro-geophysics from CU in 1980. Logged over 615 hours in space as a member of the crew of Space Shuttle Columbia for the STS-35/Astro-1 and Space Shuttle Endeavour for the STS-67/Astro-2 missions.

Spent part of his childhood in Colorado Springs. Received a bachelor of science degree in applied mathematics from the CU at Colorado Springs in 1983. Flew on STS-113 Endeavour to the International Space Station, logging over 330 hours in space.

Born June 28, 1946, in Denver. Received a master of science degree in astrogeophysics from CU in 1970. He is a veteran of three space flights and has logged over 482 hours in space.

Astronaut emeritus with 24 years of NASA astronaut service and 32 years in the Navy, currently lives in Conifer. Flew aboard STS-41B Challenger, launched from the Kennedy Space Center in 1984, and STS-31 Discovery in 1990. McCandless made the first, untethered, free flight in space and logged 312 hours.

Performed research at the Joint Institute for Laboratory Astrophysics in Boulder. A veteran of three space flights (1984, 1986 and 1988), logging 411 hours in space.

Born Aug. 16, 1933, in Durango. Received a bachelor of science in aeronautical engineering CU. Flew on Apollo 14, loging more than 216 hours in space.

Colorado astronaut will have to wait two days before ...