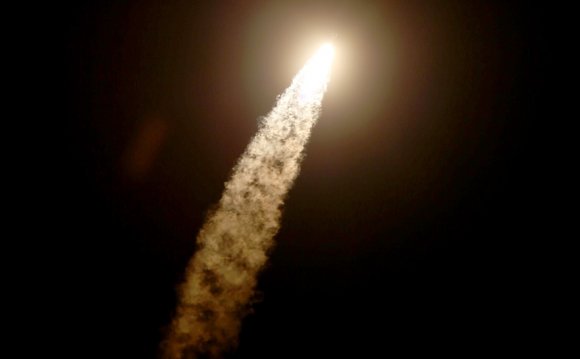 Astronauts Scott Kelly and Tim Kopra of NASA, and Tim Peake of the European Space Agency delivered a holiday message from the International Space Station on Dec. 18. The station Christmas tree can be seen just to the right of Kopra's head.

A Russian Progress cargo ship departed Monday (Dec. 21) from the Baikonur Cosmodrome launch site in Khazakhstan, carrying more than 2.8 tons of food and supplies. The vehicle arrived at the station on Wednesday (Dec. 23). A NASA representative told Space.com there is a small amount of space allotted for personal crew items, which might include some holiday gifts or Christmas treats.

A close-up of the space station Christmas tree, snapped by Canadian astronaut Chris Hadfield during the Expedition 34 mission in 2012.

The first American Christmas celebrated in space was in 1968, when the crew of Apollo 8 spent Christmas Eve circling the moon. The video broadcast of Jim Lovell reading from the Book of Genesis was seen and heard all over the world.

But celebrating the winter holiday season on the space station became a consistent tradition when humans began permanently occupying the orbiting outpost in 2000. The station is currently stocked with a few Christmas decorations, including a small tree and some stockings, according to a NASA representative.