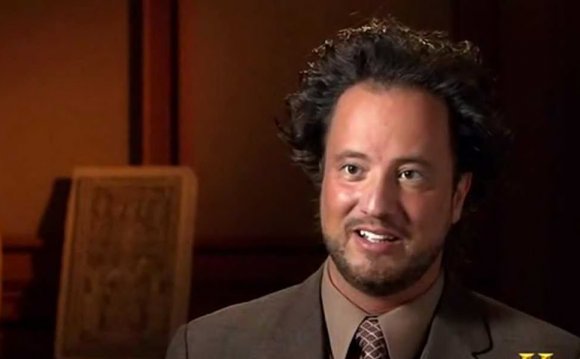 Giorgio A. Tsoukalos, the star and Consulting Producer of ANCIENT ALIENS - THE SERIES 2010, is the real-life Indiana Jones! With his excitement of discovery, delightful wit and distinctive approach to archaeological findings, is changing the way the world thinks about the Ancient Astronaut Theory. One of the few who have actually visited and explored nearly all the (currently known) mysterious places on Earth, he has conducted and participated in several risky expeditions and adventures to the most remote corners the planet -54 countries ...and counting- in search of the mysterious in his quest to uncover the Truth. Traveling hundreds of thousands of miles, seeking out strange archaeological artifacts and monuments which will further strengthen his research. Over the years he has gained first-hand access to photograph and measure ancient artifacts and archaeological relics not currently accessible to the general public. His scientific study includes detailed analysis of ancient scriptures, drawings, artifacts and mysterious archaeological monuments, that has uncovered strong supporting evidence for the Ancient Astronaut Hypothesis.

As the leading Ancient Astronaut expert, he has appeared on The History, Travel, and National Geographic Channels, and many other international programs, lectures around the world about Ancient Astronauts, always promoting archaeology, astronautics and SETI research. His numerous articles have appeared in national and International publications.
For over 12 years, Giorgio has been the Director of Erich von Daniken's official international research organization, Center for Ancient Astronaut Research (A.A.S. R.A. - Archaeology, Astronautics and SETI Research Association) which was co-founded in 1998 by Giorgio Tsoukalos, Ulrich Dopatka, and Erich von Daniken (Chariots of the Gods) The A.A.S. R.A. is determined to prove, using scientific research methods, but in "layman's terms, " as to whether or not Extraterrestrials have visited Earth in the remote past. Giorgio is the official representative for Erich von Daniken in the United States and the rest of the English-speaking world.

Giorgio is of Greek and Austrian descent and is fluent in five languages: English, German, French, Italian, and Greek and proficient in Spanish. He grew up in the little town of Laufenburg, Switzerland, spending summers in the Greek Islands, and winters in Innsbruck, Austria. He was educated at Institut Montana an international boarding school in the heart of Switzerland near the Alps (It's wonderful! Check it out!)

One Year as the Neil A. Armstrong Flight Research Center

The Image of God , Jeff A Benner - Ancient Hebrew Research ...