How many astronauts are on the ISS? 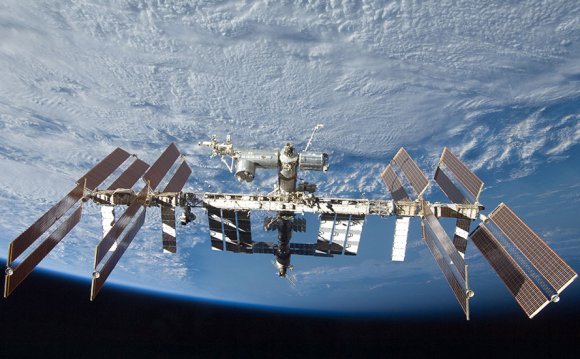 A major cooling system failure on the International Space Station has thrust the 12-year-old orbiting laboratory into the limelight. NASA plans two emergency spacewalks, Friday and Monday, to replace a pump in one of the two U.S. cooling system loops attached to the station's exterior.

The ISS is the largest spacecraft ever built, and its assembly has been ongoing for more than a decade. Its first component, the Zarya control module that provided the station's initial propulsion and power, was launched Nov. 20, 1998.

100 billion: Estimated cost of the ISS in U.S. dollars. This gives the space station the grandiose title of being the world's most expensive single object.

220: The average distance in miles above Earth's surface the ISS orbits (250 kilometers). On a clear day, the ISS is easily visible to the naked eye from the ground.

147: The number of spacewalks taken so far to build, maintain or repair the space station.

135: How many times you would have to cross North America to travel a distance equal that traveled by the ISS in one day (about the distance to the moon and back).

110: The number of kilowatts of power that the ISS will be supplied with by an acre of solar panels.

99: The percentage of the ISS structure that has been completed.

52: The number of computers aboard the ISS to control its systems.

14: The number of pounds of crew-expelled air that the ISS systems recycle each day (6.4 kg). Of this, 6 pounds (2.7 kg) comes from the U.S. members of the ISS crew. The water produced by this recycling is used for technical or drinking purposes.

13: The number of rooms on the station, including a small, seven-window lookout dome that provides stunning views of Earth from orbit.

8: The total length, in miles, of wire that will connect the electrical power system (12.9 km).

6: The number of months that an astronaut typically lives and works on the ISS during a mission. Six is also the size of the crew currently aboard the ISS.

5: The number of unmanned spacecraft currently used to haul supplies to the space station or contracted to do so in the future. Current robotic spacecraft include Russia's Progress vehicle, the European Space Agency's Automated Transfer Vehicle and Japan's H-2 Transfer Vehicle.

NASA also has contracts with the company SpaceX to provide cargo flights using its unmanned Dragon spacecraft, and with Orbital Sciences in Virginia to do the same on its planned Cygnus spacecraft. These private spaceships are slated for test flights in the next year or so.

3: The size of the ISS' first crew in 2000, and the number of astronauts or cosmonauts ferried to the station on a single Russian Soyuz spacecraft.

2: The size of the smallest crew ever aboard the ISS since long-duration missions began.

1.5: The number of 747s that would provide the equivalent volume of space that is pressurized within the ISS, allowing the crew to work without spacesuits. Of the 33, 023 cubic feet (935 cubic meters) of pressurized volume, about 15, 000 (425 cubic meters) is habitable volume where astronauts can live ? more room than a conventional three-bedroom house.

Watch three astronauts repark a Soyuz capsule on the ISS

NASA "ASTRONAUT" ADMITS SPACE PICS ARE FAKE ON THE ISS ???