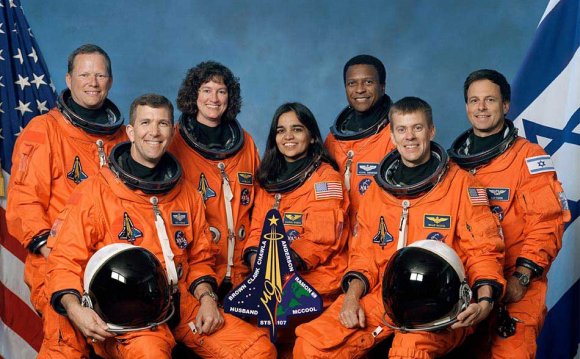 Seat restraints, pressure suits and helmets of the doomed crew of the space shuttle Columbia didn't work well, leading to "lethal trauma" as the out-of-control ship lost pressure and broke apart, killing all seven astronauts, a new NASA report says. At least one crewmember was alive and pushing buttons for half a minute after a first loud alarm sounded, as he futilely tried to right Columbia during that disastrous day Feb. 1, 2003.

In fact, by that time, there was nothing anyone could have done to survive as the fatally damaged shuttle streaked across Texas to a landing in Florida what would never take place.

But NASA scrutinizes the final minutes of the shuttle tragedy in a new 400-page report released Tuesday. The agency hopes to help engineers design a new shuttle replacement capsule more capable of surviving an accident. An internal NASA team recommends 30 changes based on Columbia, many of them aimed at pressurization suits, helmets and seatbelts.

As was already known, the astronauts died either from lack of oxygen during depressurization or from hitting something as the spacecraft spun violently out of control. The report said it wasn't clear which of those events killed them.

And in the case of the helmets and other gear, three crewmembers weren't wearing gloves, which provide crucial protection from depressurization. One wasn't in the seat, one wasn't wearing a helmet and several were not fully strapped in. The gloves were off because they are too bulky to do certain tasks and there is too little time to prepare for re-entry, the report notes.

Had all those procedures been followed, the astronauts might have lived longer and been able to take more actions, but they still wouldn't have survived, the report says.

The new report comes five years after an independent investigation panel issued its own exhaustive analysis on Columbia, but it focused heavily on the cause of the accident and the culture of NASA.

The new document lists five "events" that were each potentially lethal to the crew: Loss of cabin pressure just before or as the cabin broke up; crewmembers, unconscious or already dead, crashing into objects in the module; being thrown from their seats and the module; exposure to a near vacuum at 100, 000 feet; and hitting the ground.

Columbia disintegrated as it returned to Earth at the end of its space mission. The accident was caused by a hole in the shuttle's left wing from a piece of foam insulation that smashed into it at launch. The breach in the wing brought it down upon its return to Earth. Killed in the disaster were commander Rick Husband, pilot William McCool, Michael Anderson, David Brown, Kalpana Chawla, Laurel Clark, and Ilan Ramon of Israel.

A timeline of what was happening in crew compartment shows that the first loud master alarm — from a failure in control jets — would have rung at least four seconds before the shuttle went out of control.

Twenty-six seconds later either Husband or McCool — in the upper deck with two other astronauts — "was conscious and able to respond to events that were occurring on board."

Shortly after that, the crew cabin depressurized, "the first event of lethal potential." That would have caused "loss of consciousness" and lack of oxygen. It took 41 seconds for complete loss of pressure.

Dr. Jonathan Clark, a former NASA flight surgeon whose astronaut wife, Laurel, died aboard Columbia, praised NASA's leadership for releasing the report "even though it says, in some ways, you guys didn't do a great job.

"I guess the thing I'm surprised about, if anything, is that (the report) actually got out, " said Clark, who was a member of the team that wrote it. "There were so many forces" that didn't want to produce the report because it would again put the astronauts' families in the media spotlight.

Some of the recommendations already are being applied to the next-generation spaceship being designed to take astronauts to the moon and Mars, said Clark, who now works for the National Space Biomedical Research Institute at Baylor College of Medicine in Houston.

Kirstie McCool Chadwick, sister of pilot William McCool, said a copy of the report arrived at her Florida home by FedEx Tuesday morning but that she had not read it.

"We've moved on, " Chadwick said. "I'll read it. But it's private. It's our business ... Our family has moved on from the accident and we don't want to reopen wounds.

Columbia astronauts were kept in the dark regarding their ...