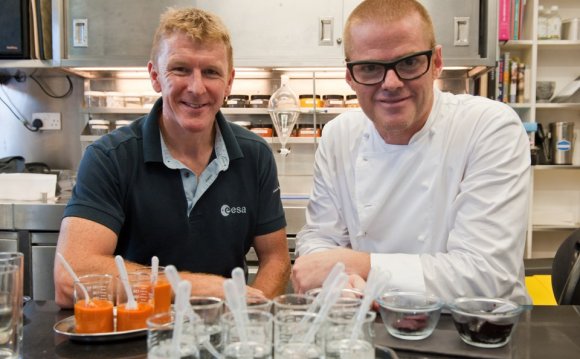 But Magnus didn’t just rely on the people on the ground to create food in packets . She experimented in zero gravity - and it sounds like she’d give even Blumenthal a run for his money. Tortillas were a particular favourite springboard for her inventions.

“Even a 16-day menu and [with] personal preference food thrown in, the food can get monotonous, " she explained.

“But on a tortilla you can take a pouch of black beans, add some cheddar cheese spread, and some hot sauce or salsa, and presto, a whole new taste!

“I have put apple sauce with peanut butter on a tortilla, beef enchiladas with tomatoes and artichokes (one of our dehydrated vegetable dishes) with salsa on one, tuna with mayo and mustard as another experiment, vanilla pudding with strawberries (it turns out the tortillas are better as a base for fruits and puddings than the waffles are), just to name a few."

Asparagus from the US's first Shuttle mission in 1981 Credit: NASA

And what's next? “The next big leaps in space food will really be the ability to grow food in space, ” said Levasseur.

“You have to pack everything you need while on Earth, so taking seeds to grow rather than full plants or packages of food would really change our ability to live long-term on spaceflights to and from the Moon or Mars.”

An artist's impression of what a cultivation area for vegetables might look like inside a space ship Credit: NASA

Peake’s food on Christmas Day probably won’t be quite the same as sitting down at the family table, candles lit, to a meal of (slightly dry) turkey and a mound of roast potatoes all covered in goose fat. But Dr Levasseur said that the Brits’ Christmas dinner on the Space Station - which will include a Heston Christmas pudding - will be “very familiar” to a holiday meal on Earth. Far from that crumbly ‘Astronaut Ice Cream’ Father Christmas might have got you as a child.