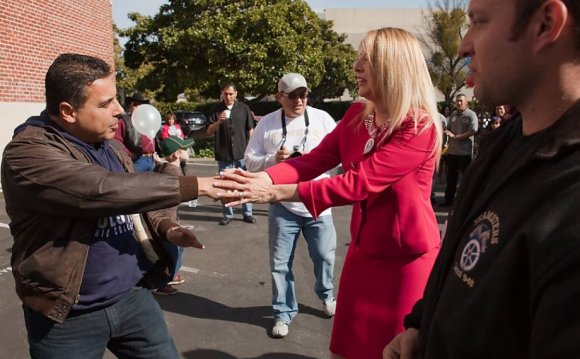 When Jose Hernandez was born, many people thought his life was mapped out for him.

Raised by migrant farm workers, it was assumed he would continue working in the fields just as his ancestors had done before him. But Jose defied those expectations by dreaming big, working hard and believing he would one day reach for the stars as an astronaut for NASA.

"I just remember getting up early, at 4:30 in the morning, " Jose recalled with his father, Salvador. "It was still dark."

"All muddy, " Salvador said, as both father and son walked through the strawberry fields they used to pick together. "I remember."

"It taught me to work hard and nothing is given to an individual, I mean you gotta work for it and every time I collected that paycheck, believe me I felt that I earned every penny of it, " Hernandez said.

Like any typical migrant farm working family, every spring Hernandez's family would make the two-day journey from Mexico to the Central Valley of California. There they would spend the next nine months working from farm to farm picking whatever fruit or vegetable was in season. They moved from town to town, and would rent a two bedroom little house, a shack basically, and his parents would work in the fields Monday through Friday.

In spite of having just a third grade education, his parents understood the importance of school and demanded Jose and his siblings work just as hard in the classroom.

"We would go to school, " Jose said. "Come Saturday and Sunday, we would be right alongside them working in the fields and while all my friends loved summer vacation, the Hernandez kids hated it. Cause we knew that represented seven days of work in the fields picking crops."

There was one day in particular where Hernandez and his four siblings were particularly tired of working. Jose's father knew exactly how to respond to the complaints of his four kids coming from the back of the car.

"Good, remember this feeling because you guys have the privilege of living your future now, " Salvador told Jose and his brothers.

Then in 1972, Apollo 17 captured the imagination of a nation and inspired a little boy tuning in on television while he was holding the antenna to get the best reception possible. Jose remembers vividly watching Eugene Cernan walk on the moon.

"And I would hear NASA and Walter Cronkite narrate the moon walk, " Jose said. "Hear him talk with mission control center. Then I would go outside and I would see the moon outside. I would come back inside and see the moon walk. And did that about three or four times. I said you know Papa, Mama, that's what I want to do. I want to be an astronaut."

Instead of steering Jose away from such a lofty [big] dream, his father sat him down and gave him something more important - belief.

"He looked at me in a challenging way... "so that's what you really want to be?", " Jose said of his father Salvador. "Yes, sir." And then he said "I think you can do it, " my eyes got big. You just have to follow a simple recipe. Draw yourself a road map. What are the steps needed to get there? And you can't skip steps."

"You gotta pay your dues, " Jose recalled of his father's advice.

It wouldn't be easy. Jose applied 12 times in as many years before getting accepted into NASA's 2004 astronaut candidate class. Then, aboard the Space Shuttle Discovery on August 28 of 2009, his dream became a reality.

In 2011, with the space shuttle program winding down, Hernandez left NASA to spend more time with his family and decided to run for Congress. He lost in a narrowly decided race to the incumbent, but vows to run again and one day serve his neighbors.

"It took me 12 tries to become an astronaut, " Hernandez said. "You think I'm gonna quit my first time as a congressman? I don't think that's in my nature."

Belief is a big thing in Hernandez's life. It has carried him to this point, and it's something he hopes to pass on to his children.