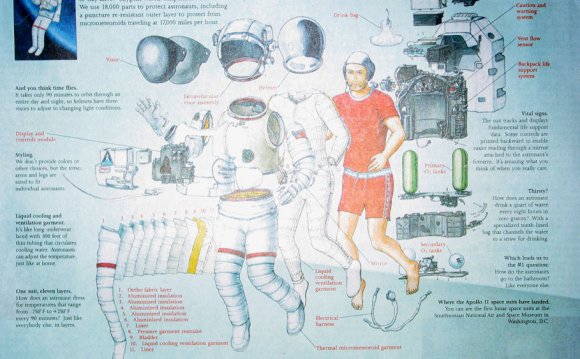 “I read it all kind of voraciously, ” Hadfield says in Episode 100 of the Geek’s Guide to the Galaxy podcast. “Just letting those good writers help my imagination stretch and soar.”

Early pulp adventures taught him that desperate astronauts might achieve vectored thrust by venting their water tanks into space, an idea he kept in the back of his mind on his own missions. And he’s always delighted when film and television portrayals capture the reality of space travel, such as the scene in 2001: A Space Odyssey when an astronaut goes on a space walk.

“In 2001 they guessed right, ” says Hadfield. “They did an accurate portrayal of the sense of aloneness, and the sounds, and what it would really be like. And it helped it be slightly more familiar.”

Listen to our complete interview with Chris Hadfield in Episode 100 of Geek’s Guide to the Galaxy (above), in which he discusses why Gravity needed more adult diapers, why the dinosaurs should’ve had a space program, and what to do if you ever find a snake in your cockpit. Then stick around after the interview as frequent guest geek Matt London joins hosts John Joseph Adams and David Barr Kirtley to celebrate 100 episodes of Geek’s Guide to the Galaxy.

“I was primarily using Twitter on board, because it took the least amount of time for me to share as much information [as possible]. I could just take a picture and send it via Twitter with a caption to the world. And my son Evan was managing the ground version of it … and he pointed out to me, he says, ‘Hey, look, William Shatner has written you a note. You’ve got to reply.’ And so I found it very funny, because of course the blending in my mind of fact and fiction when Star Trek was on was complete. I was seven or eight, I couldn’t tell the difference between a comic book hero and a real person, and so for James Tiberius Kirk to send me a communique while I was living on board a space station was such a delightful crossover of fact and fantasy, I just couldn’t let it go by, and so I thought I’d have a little fun with it, and just typed out a quick answer back to him.”

“I think that video, which took a fantasy/science fiction view of space travel, and very brilliantly told a little story, and created a sense of emotion, somehow that became real, when I had a chance to sing it and record it on board the space station. It interweaves science fiction and science fact, and all sorts of people have sent me pictures of their kids hypnotically watching it over and over again, and trying to square inside their head the normality of it and the juxtaposition of it, and I think the reason that hundreds of millions of people have seen it is just that it links science fiction and fantasy with reality, that we have built something — the world has built a place — where science fiction and fantasy become real.”

David Barr Kirtley on networking with other writers:

“I was at a convention and I met an established author, and he learned that I lived in Westchester, and he said, ‘Oh, well, I live in Westchester too. You should sign up for my mailing list.’ So I did, and then through his mailing list I got invited to a reading he was doing at a bookstore in Westchester. And I thought, ‘Wow, normally I have to take the train an hour into New York to meet anyone in the literary world, and here’s this guy who lives right in my neighborhood, and I’ll meet all sorts of other authors and fans in Westchester that I never even knew existed.’ So I went to this bookstore, and there were about eight people in the audience. The author read, and then he says, ‘Are there any questions?’ The other people in the audience were two families, and the father of the first family raises his hand and says, ‘How do you get published?’ And the author says, ‘Well, are you interested in publishing science fiction specifically, or general fiction?’ And the guy says, ‘No, I’m a photographer, and I take pictures of cityscapes, and I want to know how to publish a book of photos of cityscapes.’ And the author said, ‘Well, I wouldn’t really know anything about that.’ And the guy said, ‘Okay, thanks, ’ and he and his family got up and walked out. So now it’s me and this other family. And the father of the second family raises his hand and says, ‘My question is sort of along the same lines as the last question.'”