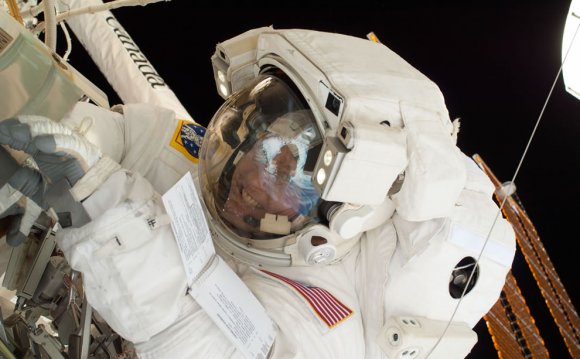 NASA astronaut Scott Kelly, bottom, and cosmonauts Yuri Malenchenko and Sergey Volkov help NASA astronaut Tim Kopra out of his spacesuit on Jan. 15, 2016. Kopra's spacewalk with ESA astronaut Tim Peake (still in airlock) was terminated early due to a droplet of water forming in his helmet (visible top left).

For the second time in less than three years, a spacewalk outside of the International Space Station has been cut short because of a water leak in an astronaut's helmet.

The incident was reminiscent of a similar one involving Italian spaceflyer Luca Parmitano in July 2013, but was not nearly as dramatic or severe, NASA officials said. Parmitano noticed a significant buildup of water in his helmet — the result of a problem with his spacesuit's water-circulating cooling system, investigators later determined — whereas Kopra dealt with a much smaller amount. [How NASA Spacesuits Work: EMUs Explained (Infographic)]

"The crew is not in any danger whatsoever, but the decision was made, playing it safe, to get the crew back inside and to get them in a safe configuration, " NASA commentator Rob Navias said during the spacewalk.

Kopra and Peake began the spacewalk, or extravehicular activity (EVA), at 7:48 a.m. EST (1248 GMT) today, and were scheduled to be outside the orbiting lab for about 6.5 hours. They accomplished their main goal — replacing a failed voltage regulator — in efficient fashion, then set to performing some secondary tasks.

Astronauts Tim Kopra and Tim Peake were directed to return early from their spacewalk on Jan. 15, 2016 after Kopra noticed a water bubble in his helmet. Before that, they completed their major objective of replacing a failed voltage regulator for one of the space station's eight power lines, following this route from the airlock.

Kopra noticed a small bubble of water inside his helmet at 11:56 a.m. EST (1656 GMT), and shortly thereafter spacewalk controllers on the ground decided to terminate the EVA as a precaution, NASA officials said. The two astronauts were back inside the International Space Station, safe and sound, by 12:31 p.m. EST (1731 GMT).

"I could definitely tell the sides were swollen, " Kopra said after getting back to the space station, referring to the water-absorbing pad inside his helmet. "The first time I noticed it was probably just about the same time that I saw the water start to come down from the top, and it was fairly noticeable. The difference between nominal and what I initially felt was pretty small."

The next step is figuring out what exactly happened.

"Commander Scott Kelly will assist the crew members with an expedited removal of their spacesuits and helmets, " NASA officials wrote in an update today. "Once they have removed the spacesuits and helmets, the astronauts will use a syringe to take a water sample and retrieve the helmet absorption pad to determine what may have prompted the water to form inside Kopra's helmet."

Before noticing the leak, Kopra had also reported a higher-than-normal carbon dioxide reading, which was traced to a faulty sensor in his spacesuit.