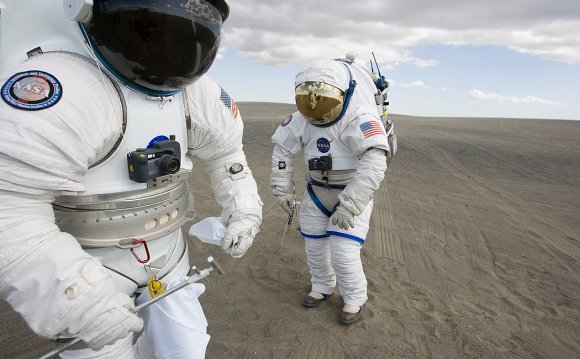 Astronauts wear spacesuits to stay safe in space. Today’s spacesuits are used on the International Space Station. But NASA has used other spacesuits in the past.

NASA astronauts first flew into space during the Mercury program. NASA’s first spacesuits were made for Mercury. The Mercury suits were only worn inside the spacecraft.

NASA’s first spacewalks took place during its second space program, Gemini. The suits used for Gemini were better than the Mercury suits. But the Gemini suits were simpler than today’s suits. These suits did not contain their own life support. A hose connected the astronaut to the spacecraft. The astronaut breathed oxygen from the spacecraft through the hose.

How Were Moon Spacesuits Different?

After the Apollo flights, astronauts orbited Earth on a space station named Skylab. Their spacesuits were like the Apollo suits in some ways. But like the Gemini suits, these suits connected to Skylab with a hose.

What Suits Did Astronauts Wear on the Space Shuttle?

What Other Suits Do Astronauts Wear?

NASA plans to send people to places that humans have never gone before, like an asteroid and, one day, Mars. That means astronauts will need new spacesuits.

Stamping on Balloons in an Astronaut Suit...