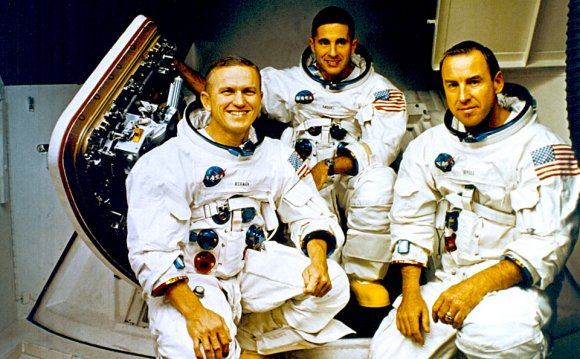 Climate alarmism is "the biggest fraud in the field of science" and the 97% consensus claim is nonsensical, Apollo 7 astronaut Walter Cunningham tells MRCTV in a preview of his presentation at the upcoming Heartland Institute climate conference, July 7-9.

"Since about 2000, I looked farther and farther into it, " Col. Cunningham (USMC, Ret.) tells MRCTV in an exclusive interview. "I found that not one of the claims that the alarmists were making out there had any bearings, whatsoever. And, so, it was kind of a no-brainer to come to the conclusion."

Cunningham rejects the notion of man-made climate, not only as fact - but also as even qualifying as an actual "theory":

"In the media, it was being called a theory. Obviously, they didn't know what it means to be a theory, " says Cunningham who has a B.S. in Physics (with honors) from University of California at Los Angeles and an M.S., with distinction; Institute of Geophysics And Planetary Sciences, with completed work on Doctorate in physics with exception of thesis.

"If we go back to the warmist hypothesis - not a theory, but, a hypothesis - they've been saying from the very beginning that carbon dioxide levels are abnormally high, that higher levels of carbon dioxide are bad for humans, and they thought warmer temperatures are bad for our world, and they thought we were able to override natural forces to control the earth's temperature. So, as I've looked into those, that's the problem that I've found, because I didn't find any of those to be correct - and, they certainly were not a theory, it was just their guess at what they wanted to see in the data they were looking at."

Cunningham urges Americans to look at the data and decide for themselves, instead of taking anyone else's word for it:

"You go out and take a look at it and you find out that a lot of it is pure nonsense and wishful thinking on the part of the alarmists who are looking for more and more money to fall into their hands."